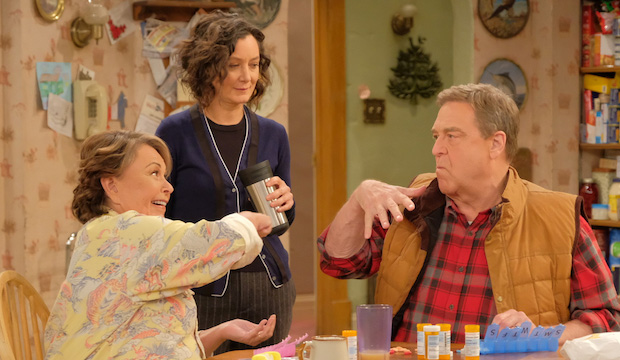 “Roseanne”’s already precarious Emmy chances took a major — irreparable? — hit Tuesday when ABC canceled the sitcom after Roseanne Barr’s racist tweet comparing Valerie Jarrett to an ape. ABC axed its Emmy campaign and our users don’t see anyone from the show making the cut, which might not actually be a bad thing for John Goodman, who is in the running for his eighth Best Comedy Actor nomination for “Roseanne.” An eighth nomination and a loss would make Goodman the category’s biggest loser.

Though he later took home Best Drama Guest Actor for “Studio 60 on the Sunset Strip,” Goodman never won for playing Dan Conner and is currently tied with fellow seven-time losers Hal Linden (“Barney Miller”) and Matt LeBlanc (“Friends,” “Episodes”) in the category for most nominations without a win. Unlike Goodman, neither Linden, a three-time Daytime Emmy champ, nor LeBlanc, who’s in 15th place in our odds for “Episodes,” have won an Emmy in another category yet.

Three people, Michael J. Fox (“Family Ties,” “Spin City”), Carroll O’Connor (“All in the Family”) and Tony Shalhoub (“Monk”), have received eight nominations, and all of them have won at least three statuettes. Fox and O’Connor have won four total, a category record they share with Kelsey Grammer (“Frasier”) and Jim Parsons (“The Big Bang Theory”).

While “Roseanne,” Barr and Laurie Metcalf have all fallen several spots in their respective category odds since the cancellation, Goodman is holding steady in eighth place, two spots off the shortlist. Even before this scandal, Goodman probably didn’t have a great shot at actually winning — Donald Glover (“Atlanta”) is way out in front — but it’s that age-old question: Is it better to keep racking up nominations without winning? At least he has that “Studio 60” Emmy sitting at home.