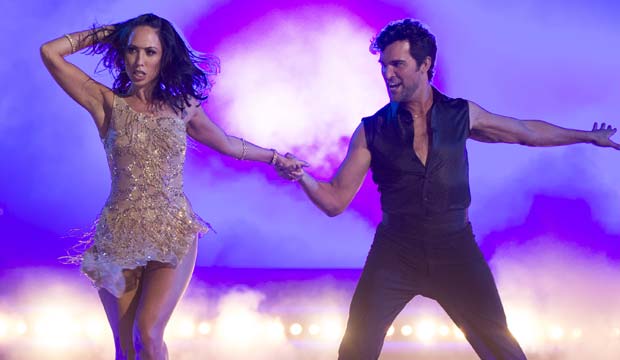 R&B singer Tinashe led our “Dancing with the Stars” Mirror Ball predictions for the first three weeks of the competition, but one perfect samba has knocked her off her perch. On Most Memorable Year Night “Fuller House” actor Juan Pablo Di Pace not only got the first 10s from the judges this season, he got all 10s, and it’s only week three! In fact, that was the earliest perfect score in the show’s history. That has moved him into first place on our predictions chart with leading odds of 39/10. Do you agree that he’s now the one to beat?

Interestingly, even though Tinashe and Di Pace have only danced four times on the show thus far, they have both topped the judges’ leaderboard three times. On premiere night Tinashe got the top marks (23 out of 30), tied with football player DeMarcus Ware. Then on New York City Night she topped the leaderboard again (26 out of 30), this time in a three-way tie with Di Pace and Milo Manheim. And on Las Vegas Night those same three tied for the top judges score again (26 out of 30). Di Pace’s Most Memorable score is actually the first time this season a celeb has topped the leaderboard by himself.

But don’t count out Tinashe. On Most Memorable Year Night she tied with Evanna Lynch and Manheim as the judges’ second favorite dance (27 out of 30), so she has been first or second every single week to date. And she remains a top contender for the Mirror Ball Trophy, ranked right behind Di Pace with 9/2 odds. Will these two be fighting it out for the rest of the season, or are we underestimating one of their rivals?