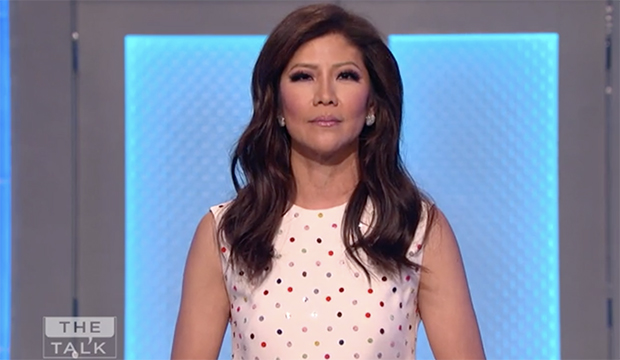 Julie Chen has officially exited “The Talk” in the wake of the sexual harassment allegations against her husband Les Moonves, but she is expected to continue hosting “Big Brother.”

Chen announced her departure on Tuesday’s episode of “The Talk” in a pre-taped message filmed outside the “Big Brother” house.

“I have been at ‘The Talk’ since the day it started nine years ago, and the cast, crew and staff have become family to me over the years,” she said. “But right now, I need to spend more time at home with my husband and our young son. So I’ve decided to leave ‘The Talk.’ I want to thank everyone at the show for our wonderful years together. I will always, always cherish the memories we shared. Most important, I want to thank you, the viewers, for allowing me into your home every day. It was a privilege that I will forever be grateful for. To everyone behind the scene, I send you my love. I will miss you all very, very much.”

Chen addressed each of her now-former co-hosts separately, ending with, “I love you all, and I know that this show, and the sisterhood that it stands for, will live on for many, many, many more years to come. You ladies got this, and I cannot be more proud to call you my friends. I love you.”

Sara Gilbert then closed the show by returning the love to Chen. “First of all, thank you so much, Julie for the kind words,” she said. “I created this show as a place for friends to come together, and I know I speak for all the hosts when I say we thank you for eight years of dear friendship and for all that you did to contribute to the success of this show. We love you, Julie.”

SEE ‘Big Brother 20’ spoilers: Who is going to lose the Week 12 early eviction vote that will air on Wednesday’s episode of #BB20?

CBS also issued a statement following the episode: “For eight seasons, Julie Chen has co-hosted ‘The Talk’ with incredible energy, grace and professionalism. Her talents played a big role in our successful launch of CBS’ first network daytime talk show, and in the series growth into an Emmy Award-winning broadcast. All of us here have tremendous appreciation for the dedication and passion she brought to the show every day and for her generous role as an ambassador for CBS Daytime. We are grateful for her many other contributions, respect her decision and wish Julie all the best in everything she does.”

Neither Chen nor CBS addressed her status on “Big Brother,” but according to CNN, she will remain as host. Season 20 of “Big Brother” concludes next Wednesday. A 21st season has yet to be ordered, but “Celebrity Big Brother,” which Chen also hosts, was renewed for a second season earlier this year.

After a second wave of sexual harassment and assault allegations against Moonves was published earlier this month in a second New Yorker exposé by Ronan Farrow, Moonves stepped down as chairman and CEO of CBS. Chen took a leave of absence from ‘The Talk’ last week in light of his ouster, saying she would return to TV on that Thursday’s “Big Brother.” She showed solidarity with her husband of 14 years on that episode, signing off the live show with “Julie Chen Moonves” instead of her usual “Julie Chen.”