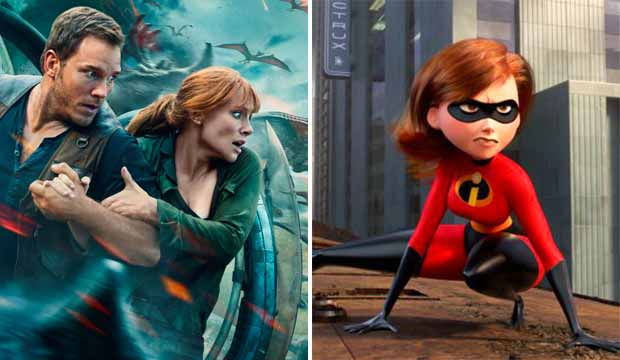 It comes as no surprise that “Jurassic World: Fallen Kingdom” opened at number-one at the box office for the weekend of June 22-24. It took in $150 million. That would be a staggering number by most metrics, but it’s actually down more than $50 million from the mammoth $208 million taken in by “Jurassic World” during its first three days in 2015, and in a year as ripe with blockbusters as this has been it’s only the fourth biggest opening of 2018 so far.

But even though it’s behind the opening weekends of “Avengers: Infinity War” ($257 million), “Black Panther” ($202 million) and last weekend’s box office champ “Incredibles 2” ($182 million), it’s hard to find a real cloud to this silver lining. Just look at the international receipts: after three weeks in foreign release the film has racked up $561 million, already bringing its worldwide total to $711 million.

The previous “Jurassic World” went on to gross $652 million domestically and $1.671 billion worldwide, which makes it the world’s fifth biggest movie of all time. The original “Jurassic Park” (1993) also made more than $1 billion, which may be even more impressive considering ticket prices when it opened. Adjusting for inflation, the domestic haul alone for “Jurassic Park” was equivalent to $839 million in 2018 dollars.

Meanwhile, after last week’s record-breaking debut “Incredibles 2” claims second place with $80 million, a drop of 55% from its opening. But that already brings its domestic total to $350 million, which is already close to $100 million more than the original made during its entire theatrical run in 2004 ($261 million). The Pixar sequel’s worldwide total thus far is $485 million.

Two other films in the top five this weekend crossed new milestones. “Ocean’s 8” finished third for the weekend with another $11 million, bringing it to over $100 million domestically. And fifth-ranked “Deadpool 2” earned $5 million in its sixth week of release, bringing it over $300 million.