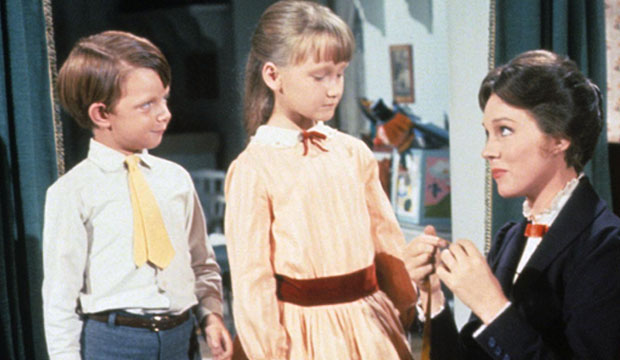 Dick Van Dyke isn’t the only star of the classic 1964 Walt Disney musical fantasy “Mary Poppins” who appears in the current sequel “Mary Poppins Returns,” which stars Emily Blunt taking over from Julie Andrews as the practically perfect nanny. Karen Dotrice, who played Jane Banks in the original film, has a cameo as a woman walking down Cherry Tree Lane and asks grown-up Jane (Emily Mortimer) for directions.

Dotrice, 63 and the mother of three, is the daughter of the late British acting couple, Kay and Roy Dotrice. She made her acting debut on the London stage as a four-year-old in “The Caucasian Chalk Circle,” which starred her godfather, the legendary Charles Laughton. And it just so happened a casting director looking for a little girl to star in Disney’s 1964 “The Three Lives of Thomasina” caught her performance. And soon she was making the movie with Matthew Garber, who played Michael Banks in “Mary Poppins.” They two also made Disney’s 1967 “The Gnome-Mobile Together.”

She retired from acting over 30 years ago and was named a Disney Legend in 2004. Dotrice recently chatted about her cameo and her memories of Disney and making the original movie.

What was your reaction when you walked onto the Cherry Tree Lane set at Shepperton Studios?
It was overwhelming. It was like going back to your childhood home. Most of the time if you go back to your childhood home it’s smaller than you remember. Well, this, of course, was bigger and better and looks more extraordinary than I remembered because it was brand new and gorgeous looking. You’ve got real horses going down the streets and children and a bazillion activities happening at once.

Talk to me about your first encounter with the grown-up Jane, Emily Mortimer
I arrived at Shepperton Studios and as being taken off to hair and makeup and as I am going around one of the corridors to make up Emily Mortimer was coming around the corner. She saw me and said, ‘Karen Dotrice! Jane Banks!’ She came hurtling down the corridor at full tilt. She gave me a big hug and a kiss. She is just the most dear. I thought to myself ‘My gosh, who’d have thought I would have grown up to be so nice?

It’s just sweet to see that psychologically, she’s grown up a very level-headed person. It was kind of interesting psychologically that Mary comes back in her life and brought her second childhood back and made her believe again and gave her some renewed hope and faith in life.

You and the late Matthew Garber who played Michael in “Mary Poppins” had previously done Walt Disney’s 1964 “The Three Lives of Thomasina” together. Did Disney see you in that film and cast you as Jane and Michael?
Yeah, because we didn’t screen test for ‘Mary Poppins.’ I certainly wasn’t cognizant of being auditioned for it. Then my mom had no recollection of us every going off to an audition. So, I think it was just going from one thing to the other. How lucky is that?

What was the atmosphere like on the set of “Mary Poppins”?
We were just like a big family, very much the same feeling as I got with this new crowd because they were all really in love with each other. Going to the set and then going to the premiere, they’re almost like best mates.  They’re all worthy of the title of being English because English people always get on really easily. There were no egos and stuff.

I’ve interviewed “Mary Poppins Returns” director Rob Marshall and he has an incredible knowledge of musicals.
There’s not one thing he doesn’t know about ‘Mary Poppins’ and not one thing he didn’t know about my body of work. He knew everything. He was telling me ‘And then we’re going to do a Big Ben sequence and you’re going to love it because, of course, you were in ‘The Thirty-Nine Steps.’

What was it like working with “Mary Poppins’ director Robert Stevenson?
He also did ‘The Gnome-Mobile’ that I was in with Matthew, too. He was very much a kind of studio director. He storyboarded the movie. If he got the storyboard shot that he wanted …he really wasn’t searching for too much more. It was just ‘Ok, we got it. Let’s move on. ‘I don’t ‘think there was enough emotion brought out of the kids. I don’t mean to disparage him because he was great at what he did, which was a formula for that kind of move and it worked very well. He had many, many successes, so it’s not for me to redirect what obviously worked.

I would imagine Disney was a constant presence on the set.
I have vivid memories of him standing behind the camera and just like learning forward and smiling and then mouthing the words to the songs, which he had been hanging around the boys [composers Richard and Robert Sherman] listening to them write and going through deciding what songs they were going to use, and which were going to be cut. He spent a lot of time on the set. This was his baby. He put every ounce of himself into that original film.

I know that you adored Disney.
I think when you’ve had a friendship with anybody ever, you’re always protective of them, but especially as a little kid. Obviously, he had quite a reputation as being a bit gruff, but when you know somebody as a kid, you just adore them.

You honored your late parents Kay and Roy Dotrice at the premiere of “Mary Poppins Returns” at the Dolby Theatre.
I wore my mum’s favorite perfume. It’s called Fracas. It was actually a perfume that Leslie Caron, the film actress, use dot wear. Leslie’s a friend of mine. She was a friend of mummy’s in London and she put her onto this perfume back in England and my mummy wore that forever. And my dad being a proper English gentleman, always had a hankie in his pocket just in case a lady needed one. So, I took one of his hankies [and put in the pocket] of the dress I had made.

Speaking of the premiere what was it like for you to see the movie.?
I think they were clever to capture that old feeling for us who’ve seen it before and have experienced the world with the animation being 2D. The first time I cried was when Ben Whishaw (grown-up Michael) was up in the attic with Jane and in the background, you see my old building blocks that spell Mary Poppins. He’s sorting through all the painful things…his wife, trying to find the deeds to the bank. So, there’s just real multi-layered feelings and thoughts and cleverness in the script. I think it’s just brilliantly written.

I was thinking of Walt and how he must be in the cinema when we were at the Dolby that night. I was kind of looking around. I almost expected to see him there.