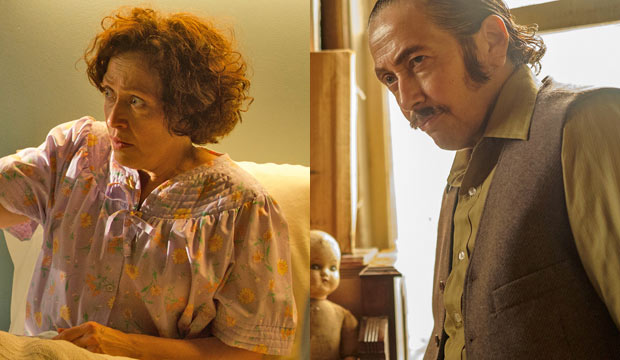 Karin Konoval has already made her mark on “The X-Files” thanks to her iconic performances as under-the-bed villain Mrs. Peacock in “Home” and fortune teller Madame Zelma in “Clyde Bruckman’s Final Repose,” but her latest role(s) in this week’s “Plus One” could make her mark on the Emmys. As twins Judy Poundstone and Chucky Poundstone and their two dopplegangers, Konoval effortlessly portrays four complicated, quirky characters who have a telepathic link. And, oh yeah, did we mention Chucky just happens to be a man?

As we know, the Emmys love when actors take on multiple roles — just ask Tatiana Maslany who prevailed for portraying all those clones in “Orphan Black” (2016). Might Konoval earn her first career nomination at the 2018 Emmys for playing this gender-bending group of doppelgangers?

SEE ‘The X-Files’ wanted Robert Patrick back as John Doggett for Season 11, but ‘scheduling issue’ got in the way

“The X-Files” showrunner Chris Carter revealed at New York Comic Con why Konoval was chosen for these unusual parts, explaining, “[‘Home’ co-writer] Glen Morgan told me she always wanted to play a man. And so I took that idea and wrote a part for her. She gets to play four different characters and two of them are men, so I think you have something interesting to watch in Episode 3.”

In “Plus One,” Special Agents Fox Mulder (David Duchovny) and Dana Scully (Gillian Anderson) investigate the Poundstone twins after a slew of violent crimes against victims who are being stalked by their doppelgangers. Somehow, the twins are using their telepathic Hangman game to target their victims. (Watch our editors’ video recap of “Plus One.”) In the end, both Judy and Chucky are murdered by their own doppelgangers, perhaps as a way of preventing Mulder and Scully from being killed by their doubles.

Konoval is a mainstay of sci-fi/horror TV series, having also appeared in Carter’s “Millennium” and such recent shows as “Dirk Gently’s Holistic Detective Agency,” “The Exorcist,” “Lucifer,” “Supernatural,” “Fringe” and “The 4400.”

Gillian Anderson was so impressed with Konoval’s performances that she recently tweeted, “And how good is @KarinKonoval??”