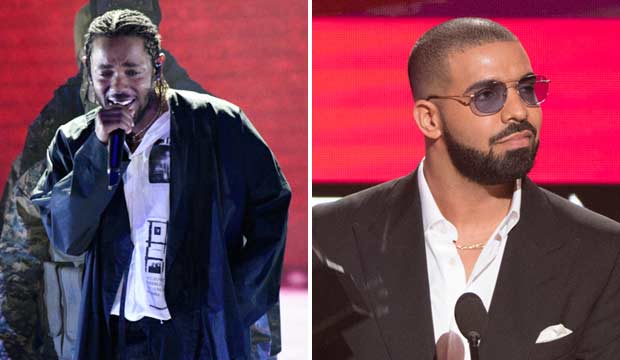 Four music superstars — Beyonce and Jay-Z, Taylor Swift and Ariana Grande — are missing from the top categories at the 2019 Grammy Awards. Drake earned three nominations in the general field as we expected: Album of the Year (“Scorpion”) and both Record and Song of the Year (“God’s Plan”) as well as four more in the genre races. Much to our surprise he is tied in the general field by Kendrick Lamar and Brandi Carlile. Check out the complete list of Grammy nominees here.

Lamar is up for Album of the Year for the “Black Panther” soundtrack, plus Record and Song of the Year for “All the Stars” with SZA. In total he has eight nominations, more than any other artist.

Singer-songwriter Carlile earned bids for Album of the Year (“By the Way, I Forgive You”) and Record and Song of the Year (“The Joke”). She earned six nominations overall this year, following just one previous nomination in her career: Best Americana Album for “The Firewatcher’s Daughter” in 2016.

Cardi B had been predicted to earn four nominations in the general field, but she only received two: Album of the Year (“Invasion of Privacy”) and Record of the Year (“I Like It” featuring Bad Bunny and J Balvin). She was nominated for five awards overall counting her bids in pop and rap categories. This was her breakthrough year, but she wasn’t eligible for Best New Artist because she already earned a pair of Grammy noms last year for her breakthrough single “Bodak Yellow.”

Post Malone wasn’t eligible for Best New Artist either. He was too well established for that category even though he had never been nominated for a Grammy before. He nevertheless earned noms for Album of the Year (“Beerbongs and Bentleys”) and Record of the Year (“Rockstar” featuring 21 Savage).

Lady Gaga also showed up twice in the general field, nominated for Record and Song of the Year for “Shallow,” her duet with actor Bradley Cooper from “A Star is Born.” This is Cooper’s first Grammy nom for Record of the Year, but Gaga was nominated once before, for “Poker Face” back in 2010.

What did you think of the shocking nominations (and snubs)?