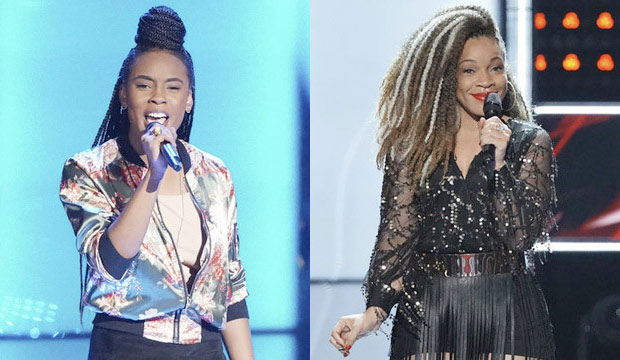 The live shows of “The Voice” are just around the corner, so now’s the perfect time to reflect on what we’ve seen so far. When all of the dozens of blind auditions, battles and knockouts are taken into consideration, two performances stand tall as the most viral videos of Season 15: Kennedy Holmes‘ rendition of Adele‘s “Turning Tables” and SandyRedd‘s cover of Bishop Briggs‘ “River.” As of this writing the blind audition videos have amassed 8.5 million and 6.2 million YouTube views, respectively, far ahead of the rest of this season’s artists. Re-watch SandyRedd’s video above and Kennedy’s video right here.

A whopping 26 finalists came out of the pre-taped rounds victorious and will now perform next week in the live playoffs. Six artists represent each of the four main coaches — Adam Levine, Blake Shelton, Jennifer Hudson and Kelly Clarkson — while two Comeback Stage artists will perform for their fifth coach, Kelsea Ballerini. See the Top 26 artists.

In her audition video Kennedy started crying when Jennifer spoke, eventually admitting that she’s dreamed of singing with her for her entire life. Hearing that, Jennifer grabbed a microphone and stepped up on stage with Kennedy for an impromptu duet of “I Am Changing.” The moment was one of the most emotional of the entire season, so it’s no surprise to see it racking up so many views online.

SandyRedd, meanwhile, made waves when Jennifer and Adam threw their shoes on the stage and Blake offered up his coffee cup. Kelly remained frozen in silence, but when she finally found her voice she remarked, “You are like fire. I mean, you are bleeding everything you want in this career. We could watch it. It was so magnificent. I don’t know who you’re gonna pick but I don’t care. I just can’t wait to watch you on this show.”

Kelly’s words affected SandyRedd emotionally, prompting her to respond, “I always let my heart lead me. I love what was said about, ‘I don’t care which team you go with, I just wanna see you win.’ So I’m gonna go with Kelly.” Unfortunately, SandyRedd didn’t last long on Kelly’s team as she dumped her during the battles. That’s when Jennifer swooped in to steal SandyRedd for her team.