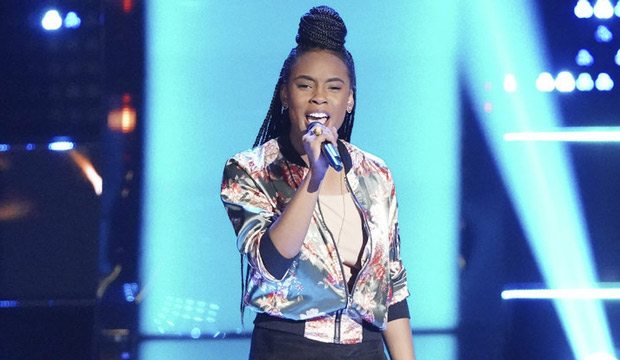 During Monday’s episode of “The Voice,” Jennifer Hudson paired up Anthony Arya and Kennedy Holmes in the latest knockout round of Season 15. Anthony performed Jim Croce‘s “Operator (That’s Not the Way It Feels)” in front of the four reality TV coaches while Kennedy impressed with Pink‘s “What About Us.” Despite Anthony’s rehearsal song being praised more by Jennifer and mentor Mariah Carey, Kennedy wowed when it counted in front of the live audience so Jennifer chose to keep her in the competition. Read the coaches’ comments below.

“It’s definitely very tough because you both have bright futures ahead of you,” Jennifer told Kennedy and Anthony. “I see a place for both of you guys wherever you want to be — somewhere in the stars. The plus of it all for both of you is you still have plenty, plenty, plenty of time. Anthony, I think you know who you are at 15, which is a huge reason why I was like, I have to steal him. Kennedy, I love the vulnerability that you show in your voice and that you were in the moment, which makes this so hard. There are no steals left, huh? Oh god. The winner of this knockout is … Kennedy.”

“Wow, that really happened,” Kennedy said backstage after her big moment. “I’m feeling extremely grateful that Jennifer still believes in me. That makes me happy and I’m very blessed.” Explaining her choice further, Jennifer divulged, “Anthony, he’s an artist. But Kennedy lived in the moment and it was beautiful. When I got Kennedy in the blinds, Blake Shelton instantly turned to me and said, ‘I think that’s the winner right there.’ If Blake said it, I believe it.”

In his “The Voice” live blog, our recapper John Benutty had this to say about the knockout: “Anthony lived up to his promise of having a simple singer songwriter vibe, performing with a guitar from a stool. As good as he sounded, there was very little energy or star quality to what he presented which just couldn’t compare to someone like Kennedy doing one of Pink’s loudest songs. Adam was highly complimentary of Anthony while both Kelly and Blake spoke more highly of Kennedy. In the end, Jennifer saw the vulnerability she wanted from Kennedy and so she kept her.”