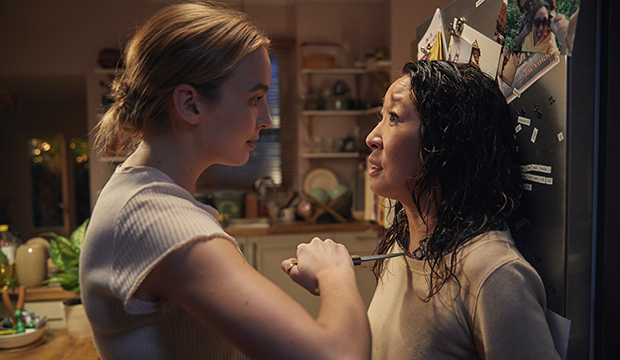 “Killing Eve” could make a killing at the Emmys — specifically in Best Drama Actress. The BBC America series has two leading ladies, Sandra Oh and Jodie Comer, and if they both get shortlisted, the category would feature two co-stars for the first time in 16 years.

The last time a show double-dipped in Best Drama Actress was “Six Feet Under” in 2002, when Frances Conroy and Rachel Griffiths lost to Allison Janney (“The West Wing”). For the three years before that, “The Sopranos” stars Edie Falco and Lorraine Bracco faced off, with the former winning twice. The ‘90s had two more co-star pairings in 1997 (“ER”’s Julianna Margulies and Sherry Stringfield) and 1994 (“Sisters”’ Sela Ward, who won, and Swoosie Kurtz).

Double lead nominees have become less common in both gendered races as Peak TV has yielded nearly 500 scripted shows in the past decade. 2002 was also the last time Best Drama Actor had two nominees from the same show (“Six Feet Under”’s Michael C. Hall and Peter Krause) until 2014 with “True Detective”’s Matthew McConaughey and Woody Harrelson. “This Is Us”’ Sterling K. Brown and Milo Ventimiglia joined the club last year.

Both stars are longshots for a nomination right now — they’re each at 100/1 in our odds — in one of the toughest categories. But Oh stands a better shot at getting in than Brit Comer, who previously starred on Starz’s “The White Princess.” A five-time nominee for “Grey’s Anatomy,” Oh is no stranger to Emmy voters. But maybe both will surprise us all on nomination day if voters become as obsessed with “Killing Eve” as Eve and Villanelle become with each other.