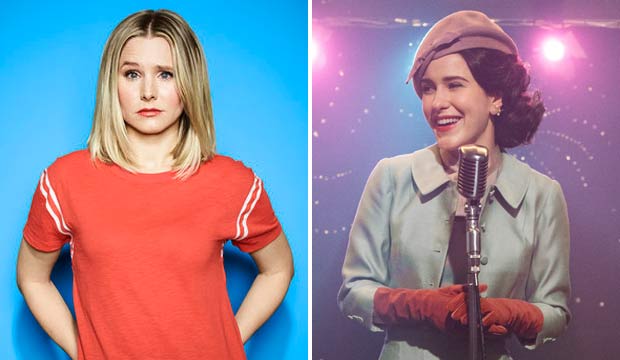 I’m going out on a limb to predict that Kristen Bell will win the Golden Globe for Best TV Comedy Actress for “The Good Place,” but I’m not alone. I’m joined by Expert journalist Chris Harnick (E!) and my fellow Gold Derby Editor Joyce Eng, plus 8 of our Top 24 Users who got the highest scores predicting last year’s Globe winners for TV and 6 of the All-Star Top 24 who got the highest scores when you combine the last two years’ Globe results. Despite that support, Bell looks like an underdog against returning champion Rachel Brosnahan (“The Marvelous Mrs. Maisel“), according to our overall racetrack odds, but here’s why I think Team Bell will be vindicated.

1. “The Good Place” has the strongest Cool Factor — Globes voters love shows that are fresh and new with tons of acclaim. Sure, “Mrs. Maisel” is actually a younger show than “The Good Place,” the latter of which is in its third season, but after “Maisel” won Best TV Comedy Series at the Globes last year and then Best Comedy Series at the Emmys a few months ago, the Amazon period series is starting to look like an old establishment favorite, while “The Good Place” remains the plucky underdog with a core constituency of passionate fans and critics. That’s reminiscent of “Parks and Recreation,” which didn’t win Amy Poehler a Golden Globe until her third try in 2014.

2. “The Good Place” is nominated for Best Comedy Series — When it comes to winning a Golden Globe for acting, it’s often crucial for your show to be nominated in the top category as a sign of support for the program as a whole. For instance, the aforementioned Poehler didn’t win that Globe until the Hollywood Foreign Press finally nominated “Parks and Rec” for Best Comedy Series too. The good news for Bell is that she and Brosnahan are the only two nominees in the category whose shows are also up for the top prize. And since Brosnahan won just last year and the Globes don’t usually like to repeat themselves, that positions Bell nicely for an upset against the incumbent.

3. Kristen Bell is drastically overdue — Bell broke out with the UPN teen noir drama “Veronica Mars” in 2004, and she was exactly the kind of new star the Globes love to anoint, like Claire Danes (“My So-Called Life”), Keri Russell (“Felicity”), Gina Rodriguez (“Jane the Virgin”) and Rachel Bloom (“Crazy Ex-Girlfriend”). But Bell was never even nominated for that show. And she wasn’t nominated for the Showtime comedy “House of Lies” either, even though her co-star Don Cheadle won Best TV Comedy Actor in 2013. This is Bell’s very first Globe nomination, so voters might want to make up for lost time, especially if they don’t want to end up in the bad place.