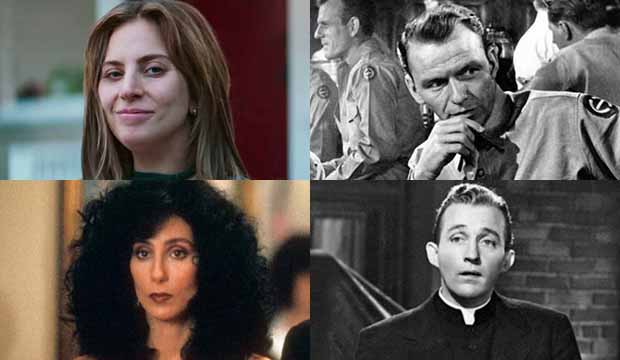 Lady Gaga has leaped into the lead in our combined Gold Derby odds for Best Actress at the Oscars. Her first on-screen feature film role in “A Star Is Born” has 19/5 top odds over more traditional actresses Glenn Close (“The Wife”), Olivia Colman (“The Favourite”), Melissa McCarthy (“Can You Ever Forgive Me?”) and Viola Davis (“Widows”). But a win by a music star in an acting category wouldn’t be a first at the Academy Awards.

Two of the all-time greats took home Oscar gold decades ago. Frank Sinatra managed to parlay his huge success as a singer to a pretty solid film career. The results included an Oscar for Best Supporting Actor for “From Here to Eternity” in 1953 and a second nomination for “The Man with the Golden Arm” in 1955 as Best Actor.

A few years earlier, crooner Bing Crosby also transitioned smoothly to film. He received three Best Actor nominations for “Going My Way” in 1944 (which he won), “The Bells of St. Mary’s” in 1945 and “The Country Girl” in 1954.

During the 1980s, Cher shockingly managed to reinvent her identity as a pop and Las Vegas singer to be taken seriously as an actress. It started in 1982 with a Golden Globe nomination for “Come Back to the 5 and Dime Jimmy Dean, Jimmy Dean” then an Oscar nomination for “Silkwood” in 1983, a Cannes Film Festival Best Actress Award for “Mask” in 1985 and finally culminating in a Best Actress Oscar for “Moonstruck” in 1987.

One of the most interesting Academy Awards victories was by failed “American Idol” contestant Jennifer Hudson. She took home the 2006 Best Supporting Actress Oscar for “Dreamgirls.”

You could also add in wins for Julie Andrews (“Mary Poppins, 1964), Barbra Streisand (“Funny Girl,” 1968) and Liza Minnelli (“Cabaret,” 1972), although their transitions where less drastic since their initial fame grew from the musical theater which required both singing and acting.

A few other singers-turned-actors that didn’t win but picked up Oscar nominations in their careers:

Diana Ross — Best Actress for “Lady Sings the Blues” in 1972

Dexter Gordon (saxophone player) — Best Actor for “’Round Midnight” in 1986

Be sure to update your predictions today and check out how our experts rank this year’s Oscar contenders. Then take a look at the most up-to-date combined odds before you make your own 2019 Oscar predictions. Don’t be afraid to jump in now since you can keep changing your predictions until just before nominations are announced on January 22.