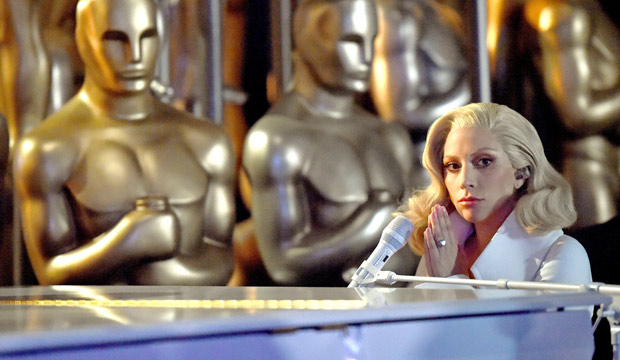 The Oscars are off the deep end. And only Lady Gaga can dive in and save them.

Last year’s 90th ceremony, in which “The Shape of Water” won Best Picture, hit an all-time low with viewers. In fact, academy chiefs were so spooked by the anemic ratings that they initiated several changes going forward, including limiting the show to only three hours and presenting some categories during the commercial breaks. “We have heard from many of you about improvements needed to keep the Oscars and our academy relevant in a changing world,” president John Bailey and CEO Dawn Hudson said in a statement. “The Board of Governors took this charge seriously.”

No matter how many tweaks the academy makes, it’s ludicrous to think that Average Joe will tune in to the 2019 Oscars because it’s shorter or because Best Sound Mixing won’t be presented live. In the end the question simply comes down to what audiences want to see on their screens. And based on this weekend’s box office, that answer is clear: Lady Gaga.

Directed by Bradley Cooper, Warner Bros.’s musical romance “A Star Is Born,” a major Oscar frontrunner, raked in more than $40 million at U.S. theaters. Together with Sony’s comic book flick “Venom,” which bit off $80 million, the box office just experienced its largest October weekend of all time. For comparison’s sake, “The Shape of Water’s” final box office tally was only $63 million, a number that “A Star Is Born” should easily match by the end of the month.

Much of the movie’s success must be attributed to Lady Gaga. The singer-turned-actor has always been an object of public curiosity, from her unique red carpet dresses to her public statements about politics. Even film critics are, pardon the pun, gaga for Gaga, with our own Susan Wloszczyna writing that “A Star Is Born” marks her “coming-out party as a legit film star.” Lady Gaga previously won a 2016 Golden Globe for television in FX’s “American Horror Story: Hotel.”

Cooper stars alongside Lady Gaga in this fourth adaption of “A Star Is Born” — he’s alcoholic country singer Jackson Maine and she’s aspiring singer-songwriter Ally. Their chemistry matches that of previous dynamic duos from the popular franchise: Janet Gaynor and Fredric March (1937), Judy Garland and James Mason (1954), and Barbra Streisand and Kris Kristofferson (1976).

Not only is “A Star Is Born” one of Gold Derby’s frontrunners to win Best Picture at the 2019 Oscars, but it’s also a top contender for Best Actress (Lady Gaga), Best Actor (Cooper), Best Director (Cooper), Best Supporting Actor (Sam Elliott) and Best Adapted Screenplay (Cooper, Eric Roth, Will Fetters), among other categories. See more Oscar odds and rankings.

Lady Gaga could realistically become a double winner on Oscar night, for acting and for co-writing the song “Shallow” with Mark Ronson, Anthony Rossomando and Andrew Wyatt. After previously performing her song “Til It Happens To You” from “The Hunting Ground” at the 2016 ceremony, and infamously losing to Sam Smith‘s “Writing’s on the Wall” from “Spectre,” Lady Gaga heads into this year’s ceremony with a major Oscar I.O.U. You can bet that Oscar viewership will go up this year as fans tune in to see whether she’ll win … and what she’ll be wearing.