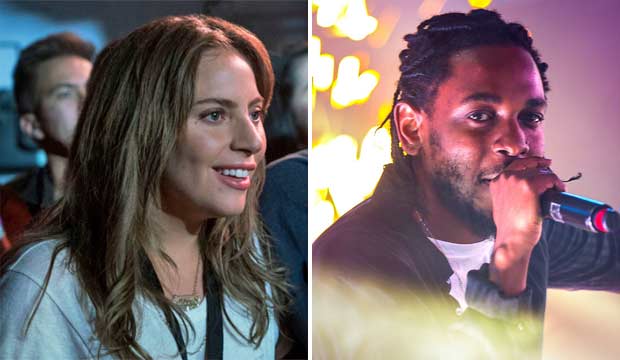 “Shallow” by Lady Gaga and Bradley Cooper (“A Star is Born“) and “All the Stars” by Kendrick Lamar and SZA (“Black Panther“) have been the two Oscar front-runners for Best Original Song since the academy announced its shortlist of 15 tunes vying for the final 5 nomination slots. But the Grammys might give us a preview of that race since both “Shallow” and “All the Stars” are up for Best Visual Media Song. Who will win?

The Visual Media Song award ostensibly honors music from all visual media including television and even video games, but the category tends to be dominated by movie songs. That’s true this year too, so these awards might give us a hint of who’s going home with the Oscar.

But the recording academy doesn’t always agree with the motion picture academy. In 2013 the Grammys picked “Safe and Sound” by Taylor Swift and The Civil Wars from “The Hunger Games” over Oscar champ “Man or Muppet” from “The Muppets.” And just last year the Grammys picked Lin-Manuel Miranda‘s “How Far I’ll Go” from “Moana” over Benj Pasek and Justin Paul‘s Oscar-winning “City of Stars” from “La La Land.”

This year we could see another split. “Shallow” is the heavy favorite to win the Oscar, according to the combined predictions of our users, but Kendrick Lamar has a stronger track record at the Grammys than Lady Gaga, with twice as many wins (12 to 6). And he’s the most nominated artist of the year with eight bids including Album of the Year for the entire “Black Panther” soundtrack. (The “Star is Born” soundtrack isn’t eligible until the 2020 Grammys.)

However, this might turn out to be an Oscars rematch rather than an Oscars preview. Because of the Grammys’ unique eligibility calendar (October 1, 2017 to September 30, 2018), their nominees often include Oscar nominees from overlapping years, and this is no exception. The other three nominees already had their Oscars face-off last year: “Mystery of Love” by Sufjan Stevens (“Call Me by Your Name”), “Remember Me” by Miguel and Natalia Lafourcade (“Coco”) and “This is Me” by Keala Settle (“The Greatest Showman”).

Just like the Oscar, this award goes just to the songwriters. “Remember Me” won the Oscar for Robert Lopez and Kristen Anderson-Lopez over “This is Me” by Pasek and Paul. So the recording academy has a chance to either rubber-stamp last year’s Oscar choice or make it up to Pasek and Paul after their Grammy loss for “City of Stars” last year (don’t feel too bad for them, they still won Best Musical Theater Album for “Dear Evan Hansen”). Or maybe they’ll make it up to Stevens, whose “Call Me by Your Name” music was a critical favorite.

So which way do you think the Grammys will go: something old or something new?