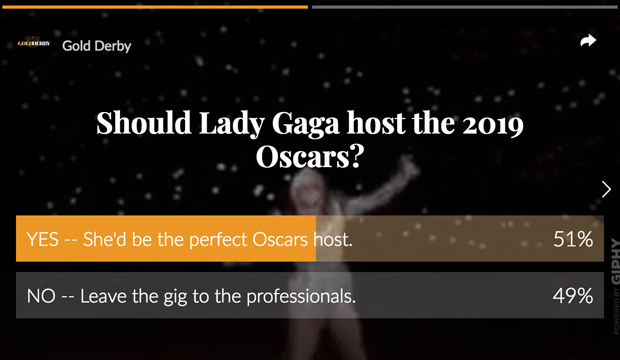 “She’d be the perfect Oscars host!” That’s how 51% of our readers voted in our recent poll about whether the film academy should tap Lady Gaga to emcee their 2019 ceremony in the wake of Kevin Hart stepping down. However, the other 49% of poll respondents weren’t as kind as they voted, “NO — Leave the gig to the professionals.” Do YOU think the “A Star Is Born” scene-stealer would make a good Oscars host? Sound off down in the comments section.

In this era of #MeToo and #TimesUp, the academy might appear out-of-touch if they hired yet another man to host their next ceremony. After all, an astoundingly low number of woman — three — have hosted the Oscars since the turn of the century: Ellen DeGeneres in 2014 and 2007, Anne Hathaway in 2011 (with co-host with James Franco) and Whoopi Goldberg in 2002 (also in 1999, 1996 and 1994).

Lady Gaga fits all the important criteria to be the next Oscar ringleader: she’s an international superstar, she sings, she dances, and she’s already in the Oscar club as she performed at two prior ceremonies. Don’t forget, the artist made her Oscar stage debut in 2015 with a medley of “The Sound of Music” tunes and then popped up again in 2016 to sing the nominated song “Til it Happens to You” from the documentary “The Hunting Ground.”

Since Lady Gaga is likely to be a two-time Oscar nominee for Best Actress and Best Song for “Shallow,” shouldn’t that take her out of the running as host? Of course not, just ask Sandra Oh. The “Killing Eve” star is nominated for a Golden Globe this year, but that didn’t stop the Hollywood Foreign Press Association from tapping her as host along with Andy Samberg. And of course, Franco co-chaired the Oscars with Hathaway in 2011 when he was nominated as Best Actor for “127 Hours.”

Hart was originally named as host of the Oscars until he dropped out following a backlash against his homophobic Twitter remarks from a decade ago. With no one else apparently on the back-burner, the academy may have no choice but to go host-less, as they last did in 1990. Or they could simply decide to welcome back Jimmy Kimmel, who just hosted in 2017 and 2018. Give us your thoughts on Lady Gaga as Oscars host down below.