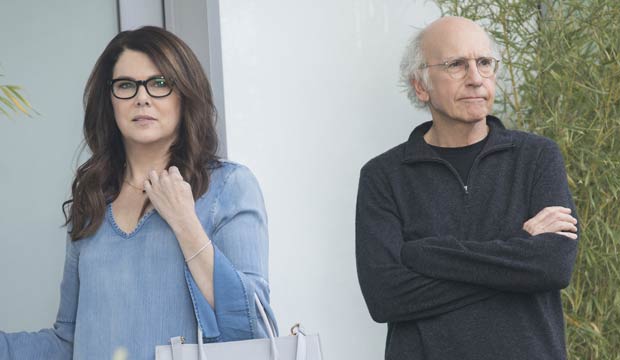 Despite a Golden Globes bid and pair of Screen Actors Guild Award nominations, Lauren Graham never contended at the Emmys for her portrayal of Lorelai Gilmore on “Gilmore Girls” in either its original 7-year run (2000 – 2007) or its 2016 revival on Netflix. But her well-regarded guest spot on the HBO hit comedy “Curb Your Enthusiasm” could finally earn her that elusive Emmy recognition.

Over the course of three episodes of the show’s ninth season – “Namaste,” “Never Wait for Seconds” and “The Shucker” – Graham portrayed Bridget, a friend of Susie (Susie Essman)’s who becomes romantically involved with Larry (Larry David). Larry and Bridget prove a terrific pairing but their relationship is tested by Bridget’s son, who has Asperger syndrome and isn’t fond of Larry. Ultimately, their fling comes to an end, not on account of her son but because Larry wants Bridget to sign a non-disclosure agreement before continuing with the relationship.

Of Graham’s appearance in “Namaste,” Randall Colburn of The A.V. Club said, “Lauren Graham’s Bridget was also a delight, and, while I wasn’t a huge fan of the way her son dominated that storyline, the chemistry between her and LD was infectious and I hope she sticks around. Because, honestly, I’ve never been a huge fan of Larry’s dating storylines, and the dynamic that his relationship with Cheryl brought to the show is sorely missed. Graham could fill that role nicely.”

In his review of “The Shucker,” Alec Bojalad of Den of Greek was also complimentary of Graham’s turn on the series, writing “this show never was fully able to make the most of Larry David and Lauren Graham’s easy chemistry but thankfully it does allow Bridget to deliver the two best lines of the season before she goes. First, after Larry accuses Eddie of faking his Asperger’s, she comes back with ‘It’s not pretend. He has Asperger’s. What’s your excuse?’ That’s about an accurate and devastating a takedown that Larry has ever deservedly received in the history of this show. Then later on when she and her friend see Larry on ‘Judge Judy,’ her friends asks ‘This is the guy you told me all the stories about?’ To which Bridget excitedly responds: ‘Yes, that’s Larry Longballs!’ Larry Longballs is perhaps the greatest callback in the history of the show and easily season 9’s funniest joke so far.”

While most of the Emmy attention for “Curb” has focused on the show and its creator, two TV vets have reaped bids for guesting on the show. Shelly Berman contended in 2008 for playing David’s father while Michael J. Fox was nominated in 2012 for playing an exaggerated version of himself who does battle with David.