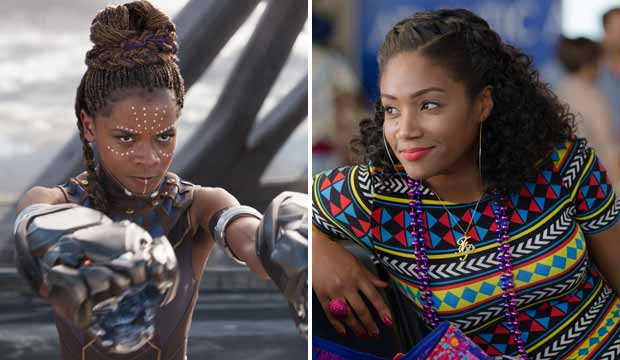 According to our predictions, Tiffany Haddish is the front-runner for Best Scene Stealer at the 2018 MTV Movie and TV Awards for her role as party-girl Dina in the sleeper hit comedy “Girls Trip.” But could she be upset by another star-making performance? Letitia Wright is within striking distance for playing wisecracking Wakanda scientist Shuri in “Black Panther” and could steal the Scene Stealer award out from under Haddish.

As of this writing Haddish gets leading odds of 21/10 based on the combined predictions of hundreds of Gold Derby users who have entered their picks in our predictions center thus far. Among those betting on her to win are three Editors who cover awards year-round for Gold Derby, 11 of our Top 24 Users who got the highest scores predicting last year’s MTV Awards and 14 of our All-Star Top 24 who got the highest scores when you combine the last two years’ winners.

But Wright is right behind her with 13/5 odds based on support from nine of our Top Users and seven of our All-Stars. These awards are decided by fans voting online, and “Black Panther” is certainly a big enough hit to win a popular vote here. It has grossed nearly $700 million in the US alone and more than $1.3 billion worldwide. “Black Panther” is also the more recent film, having opened in February while “Girls Trip” was released last July, so Wright may be fresher in voters’ minds. And Wright also appeared as Shuri even more recently in “Avengers: Infinity War,” which has set box office records since its debut on April 27.

Haddish had has the higher profile since her star-making “Girls Trip” performance: hosting “Saturday Night Live,” announcing the Oscar nominations, and of course emceeing these very awards. But she has one other nomination this year, Best Comedic Performance, so her fans have the option to check off her name in that race and choose to spread the wealth in this one.

So is Haddish really the front-runner, or do you agree with the minority report that says Wright will prevail?

'Judas and the Black Messiah' production designer Sam Lisenco: Staying true to history with the…

Jason Woliner ('Borat 2 director'): Sacha Baron Cohen returned 'because of Trump and Trumpism and what…

Sophia Loren is one of 12 Oscar winners for non-English performances: Will she be lucky 13th as well?