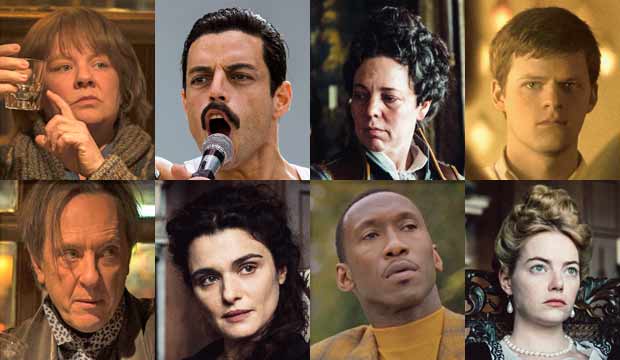 Queer representation in film has come a long way, and this year could open the floodgates at the Oscars. As of this writing we’re predicting that seven actors will be nominated for playing LGBT roles across all four acting categories, and there’s an eighth currently on the bubble. How many will make the cut?

“The Favourite” leads the way with three predicted nominees playing queer roles. Best Actress contender Olivia Colman and Best Supporting Actress hopefuls Emma Stone and Rachel Weisz are in a love triangle of sorts as 18th century royals, though it’s not entirely clear how much of their sexual interplay is about actual attraction and how much is about power.

And Mahershala Ali plays classical pianist Don Shirley in “Green Book,” for which he is our current front-runner to win Best Supporting Actor. The film explores Shirley’s struggles against the racism of the Jim Crow-era South, but it also indicates that Shirley was a closeted gay man.

The eighth is Lucas Hedges, who stars in “Boy Erased” as a gay teenager sent into conversion therapy by his conservative religious parents. As it stands Hedges isn’t among the top contenders for Best Actor, but he’s in the conversation, ranked ninth with 82/1 odds.

SEEWear it with pride: ‘Bohemian Rhapsody’ takes the crown as the top LGBT film of all time at the box office

But there could be even more depending on whether other underdog contenders do better than expected. “The Favourite” star Weisz also appears in “Disobedience” as a gay woman who returns to her conservative Jewish community after her father’s death, and Rachel McAdams plays her former lover. Chloe Grace Moretz leads “The Miseducation of Cameron Post” as the title character, who like Hedges in “Boy Erased,” is sent to conversion therapy after she’s discovered to be a lesbian.

“Love, Simon” made history as the first gay teen romantic comedy from a major studio, and its star Nick Robinson has an outside chance of a Best Actor nom. Rupert Everett also has a shot at a nomination for playing gay author Oscar Wilde in “The Happy Prince.” And Keira Knightley plays a pioneering French author who is married to a domineering man but discovers her own sexual fluidity in “Colette.”

Compare this to last year when there were only two actors nominated for LGBT roles: Timothee Chalamet (“Call Me by Your Name”) and Richard Jenkins (“The Shape of Water”). The year before there were no actors nominated for playing queer characters. And 2016 was an unusually strong year for representation with three queer roles nominated: Eddie Redmayne (“The Danish Girl”) and Cate Blanchett and Rooney Mara (“Carol”).

That said, while LGBT characters are having an impressive year, all seven of the nominations we’re predicting are for straight actors. The only openly queer actor with Oscar hopes for playing a queer character is Everett for “The Happy Prince.” So while LGBT viewers are getting more opportunities to see themselves on-screen, LGBT performers are still looking for opportunities to match.