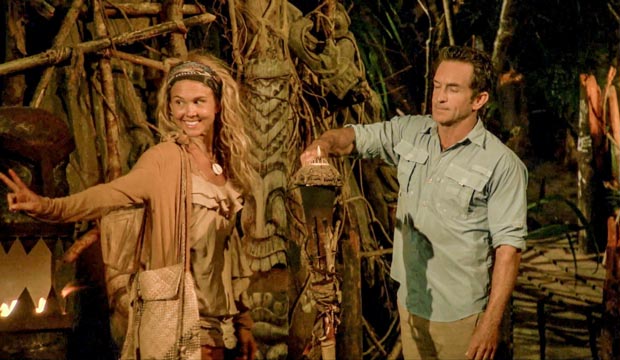 As Gold Derby readers predicted, Libby Vincek was voted out of “Survivor: Ghost Island” this week in Episode 9. This 24-year-old superfan from Houston, Texas was seen as too much of a threat by her fellow tribe mates, but the real nail in her coffin was when Michael Yerger used his hidden immunity on himself. Michael would have gone home without that advantage, but since he used it, the person with the second highest number of votes was eliminated instead: Libby. We had a chance to ask Libby five burning questions following her ouster, so check out her written responses down below.

GOLD DERBY: After watching the show on TV for so many years, what surprised you the most about actually being out on the island?

LIBBY VINCEK: One always questions if anything had changed, or if they help with anything out there. They don’t. It’s as real as it gets out there, and I wouldn’t have it any other way.

GD: Tell me about the food eating challenge! Were the fish eyeballs as gross as they appered to be on television?

LV: Ha! Yeah, I don’t know if I was that hungry but I remember saying, “Dang. That wasn’t too bad.” Hakuna Matata! Salty squishy gummy worms wrapped around really tough jerky. It’s all real, baby!

GD: What was the biggest mistake you made in the game?

LV: I don’t like to say there was one “biggest mistake.” I played my heart out, and stuck by my decisions. Maybe go searching for an idol harder? Ha but other than that, no regrets.

GD: Conversely, what game move were you the most proud of?

LV: I actually have to say the Bradley Kleihege vote. I am pretty sure Dom and Chelsea made a last minute call on that one, and if it weren’t for me saying all that I did at tribal I could’ve gone home then. Thanks for rattling on Bradley! Lol

GD: Now that you’re a jury member, what sort of qualities are you looking for in terms of who you’ll vote for to win the $1 million?

LV: I believe the most challenging part of “Survivor” is not just strategy but really being an honest good player and person. I hate when people say “Survivor” is all about back stabbing. It’s not. The true challenge is finding a perfect middle. But you better believe that stink eye will be showing up when I walk into tribal for the first time.