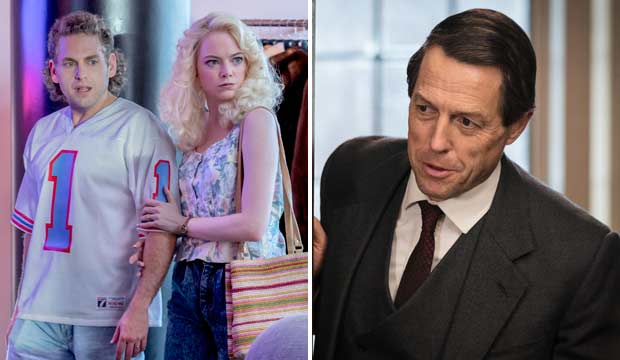 It’s no secret that the Screen Actors Guild and the Hollywood Foreign Press Association like streaming series. This is particularly true of the SAG Awards and their torrid love affair with Netflix, which includes three consecutive wins for the comedy ensemble of “Orange is the New Black” (2015-2017), the 2017 victory for the drama ensemble of “Stranger Things” and Claire Foy’s triumphs two years running (2017-2018) for her starring role in the drama “The Crown.”

Then you have the 2018 Golden Globes dominance of Amazon’s “The Marvelous Mrs. Maisel” and Hulu’s “The Handmaid’s Tale.” Amazon in particular has received lots of affection from the HFPA, also including Best Comedy Series wins for “Transparent” (2015) and “Mozart in the Jungle” (2016).

Ergo, the chances for the Netflix psychological thriller “Maniac” from creator-director Cary Joji Fukunaga and Amazon’s British import “A Very English Scandal” are looking promising indeed for Globes and SAG attention when those nominations are announced next month — December 6 for the Globes and December 12 for SAG.

SEEDarren Criss won the Emmy, but the equally fiendish Hugh Grant is breathing down his neck at the Golden Globes

The Gold Derby combined odds, based on the predictions of hundreds of users, are smiling on both limited-run efforts and their leads. In the Globes races, for instance, “Maniac” and “Very English Scandal” rank third and fourth, respectively, for Best TV Movie/Limited Series, both with 5/1 odds. “Maniac” leads Emma Stone (second place at 9/2 odds) and Jonah Hill (fourth place at 13/2 odds) look like solid bets for nominations, as do “Very English Scandal” star Hugh Grant (second place at 39/10 odds) and supporting actor Ben Whishaw (third place at 9/2 odds).

In the SAG races, meanwhile, Stone and Grant look like surefire bets for noms, ranking second and third in their respective races for movie/limited series actresses and actors, both with 9/2 odds. Hill lags behind here in eighth place at 35/1, with Whishaw and “Maniac’s” scene-stealer Sally Field considered long shots, both at 100/1.

SEEWill Rami Malek be a Golden Globe champion for ‘Bohemian Rhapsody’? They still owe him for ‘Mr. Robot’ snubs

You’ve got to like the chances for Stone, Hill and Grant for another key reason: they are primarily big-screen stars, and the deference shown by awards voters to film actors who deign to move to a smaller screen remains vivid.

Another new streaming show that has a decent shot, according to Gold Derby’s odds, is the Amazon comedy “Forever” starring Fred Armisen and Maya Rudolph. We rank it sixth for Best Comedy Series at the Globes with 18/1 odds. Meanwhile, Rudolph places third in our forecasts at 5/1. However, the show and its stars are all mired at 100/1 odds for nominations at the SAG Awards. But that can change.

Let’s take a closer look at how streaming shows have become such mainstays at the Globes and SAG Awards in just the last five years.

It all started with Netflix’s “House of Cards” star Robin Wright’s win as Best TV Drama Actress (and her co-star Kevin Spacey’s nomination that year for Best TV Drama Actor) in 2014, and it continued in 2015 with Spacey’s victory and the aforementioned Comedy Series prize for Amazon’s “Transparent,” along with “Transparent” star Jeffrey Tambor for Best TV Comedy Actor.

Then all heck broke loose for the streaming community in 2016 when the nominations came pouring in: four Comedy Series nominees were streaming shows, including Amazon’s victor “Mozart in the Jungle,” and three Comedy Actor contenders were also streaming, including winner Gael Garcia Bernal for “Mozart.”

In 2017, streamers claimed three wins: Drama Series for “The Crown” and its star Foy, plus Billy Bob Thornton as Best TV Drama Actor for Amazon’s “Goliath.”

The biggest haul yet for the streaming universe came earlier this year: 11 total nominations and 5 victories. That included Drama Series and Drama Actress triumphs for the first-year saga “The Handmaid’s Tale” and its lead Elisabeth Moss, Comedy Series and Comedy Actress prizes for “The Marvelous Mrs. Maisel” and its star Rachel Brosnahan, and Aziz Ansari claiming Comedy Actor for Netflix’s “Master of None.”

How will things fall for Netflix, Amazon and Hulu this year? Based on our odds, it’s an overwhelming likelihood that “Handmaid’s Tale” and “Mrs. Maisel” will return to the lists in their sophomore years, with “Mrs. Maisel” and Brosnahan favored to earn repeat victories. Alison Brie and her Netflix comedy “GLOW” also appear to be safe bets.

These guys really, really like Netflix series performers. Exhibit A is the aforementioned three consecutive wins for the cast of “Orange is the New Black.” But the past two years in particular have supplied ample evidence of the guild’s Netflix passion — some might say obsession.

Consider that in 2017 Foy and John Lithgow won drama acting prizes for “The Crown” and the scare-fest “Stranger Things” took home the award for its cast. On top of that, four of the five drama actress nominees represented Netflix: Foy, Millie Bobby Brown and Winona Ryder of “Stranger Things,” and Wright for “House of Cards.”

And for the second straight time, only victor Louis-Dreyfus prevented a clean Netflix nominee sweep in the field of comedy actresses, which included Aduba, Alison Brie, Fonda and Lily Tomlin.

If this year’s upcoming SAG comedy actress category were to break precisely as Gold Derby is predicting, it would be an all-streaming collection: Brosnahan and Alex Borstein for Amazon’s “Mrs. Maisel,” plus returning Netflix faves Tomlin , Brie and Aduba.

Clearly, it’s Netflix and Amazon’s world. The rest of us just live in it.