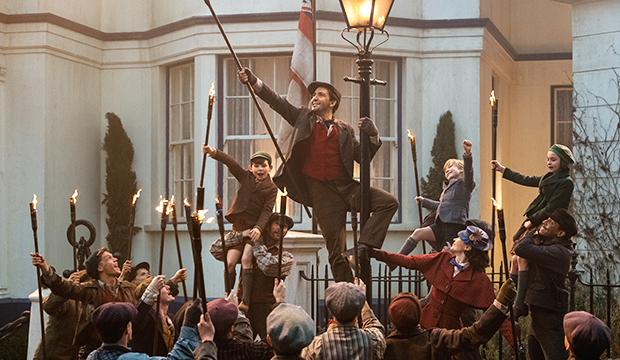 “Mary Poppins Returns” has wall-to-wall new songs, but Walt Disney is putting its weight behind two tunes for the Best Original Song Oscar: “Trip a Little Light Fantastic” and “The Place Where Lost Things Go” — and you can listen to both in full below.

A nod to “Step in Time” from the original “Mary Poppins” (1964), this exuberant seven-minute song, led by Lin-Manuel Miranda and featuring the cast, is the centerpiece number of the film, which boasts a dazzling choreographed sequence tied to the song. (It will definitely be a showstopper if they get to recreate it in part on the Oscars.) In the context of the film, Miranda’s character, Jack, a lamplighter, breaks out into the tune after Mary Poppins (Emily Blunt) and the Banks children lose their way walking home in the dark (well, the kids did; Mary Poppins does not get lost).

“The Place Where Lost Things Go”

Do you have Kleenex nearby? Because you might need it before you hit “play” on this one. This lovely, bittersweet ballad celebrates the adage “gone but not forgotten.” Like “Feed the Birds” in the original, “The Place Where Lost Things Go” is a lullaby Mary Poppins sings to the children, who later — spoiler alert! — sing a very moving reprise.

“Trip a Little Light Fantastic” and “The Place Where Lost Things Go” were both written by Scott Wittman and Marc Shaiman. Under academy rules, a film can submit up to three songs, and a maximum of two songs per film can be nominated. The original “Mary Poppins” won the category with its only nomination, for “Chim Chim Cher-ee” by the Sherman Brothers. The academy will release the shortlist submissions for Best Original Song on Dec. 17.