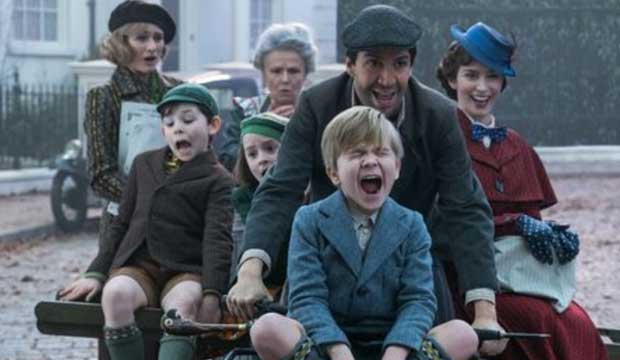 The first photo of Emily Blunt in character as the no-nonsense nanny in “Mary Poppins Returns” alongside Broadway sensation Lin-Manuel Miranda (“Hamilton”) as street lamplighter Jack just hit the web. Blunt is taking on the role that won Julie Andrews an Oscar more than half a century ago. In this follow-up, Poppins’ original charges, Michael (Ben Whishaw) and Jane (Emily Mortimer), are now grown up. Michael, his three children and their housekeeper, Ellen (Julie Walters), live in the house on Cherry Tree Lane. In this photo, we see Mary and Jack help the family rediscover joy and wonder.

“Mary Poppins” was the top-grossing film of 1964 and reaped a lucky 13 Oscar bids, winning five. Besides that Best Actress trophy for film newcomer Andrews, it took home film editing, score, song (“Chim Chim Cher-ee”) and visual effects. The big winner that night was the screen version of the 1956 Broadway musical “My Fair Lady” that had launched Andrews. After being passed over for the film, she wreaked her revenge when Audrey Hepburn, in the role of Eliza Doolittle, was snubbed by the academy.

Dick Van Dyke, who was both chimney sweep Bert and bank president Mr. Dawes Sr. in the original film, returns to play Dawes, Jr. in this version with Oscar winner Colin Firth (“The King’s Speech”) in the new role of banker William Weatherall Wilkins. Three-time Oscar champ Meryl Streep is Poppins’ crazy cousin Topsy while five-time Tony winner Angela Lansbury is the Balloon Lady. This tuner is to be released on Christmas Day, 2018.

Director Rob Marshall, who helmed the 2002 Best Picture winner “Chicago,” worked with Blunt and Streep on “Into the Woods.” Tony Awards champs Marc Shaiman and Scott Wittman (“Hairspray”) have composed new songs. And Oscar nominee David Magee (“Life of Pi”) has taken some of the seven later books by Poppins creator P.L. Travers to fashion a story set a quarter-century later than the first film.

Marshall has assembled an all-star team below the line as well, with Oscar winners in all the key positions: cinematographer Dion Beebe (“Memoirs of a Geisha”); costume designer Sandy Powell (“The Young Victoria,” “The Aviator,” “Shakespeare in Love”); hair and make-up designer Peter Swords King (“The Lord of the Rings: The Return of the King”); production designer John Myhre (“Memoirs of a Geisha,” “Chicago”); and sound mixer Simon Hayes (“Les Misérables”).