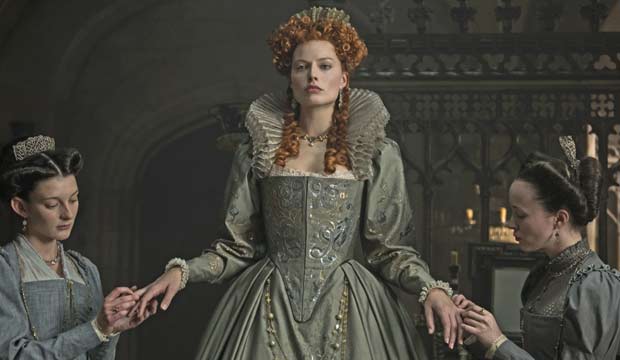 Margot Robbie (“Mary Queen of Scots”) was among the more surprising nominations last week for the Screen Actors Guild Awards, which was a big surge for her film after it had underperformed at other awards season events. Pundits had pegged Robbie and co-star Saoirse Ronan — both Oscar nominees for Best Actress just last year — as major contenders early on this season, but then another film about British royals, “The Favourite,” stole some of its thunder with critics and prognosticators. Is “Mary” once again in it to win it?

SEEwhat actresses have been nominated for playing royalty

Ahead of the film’s theatrical release on December 7, the 18th Whistler Film Festival opened with the Canadian premiere of “Mary,” which Director of Programming Paul Gratton introduced as a “feminist-revisionist” take and an “acting exercise above all.” True to its title, the film centers on Ronan as Mary Stuart, who navigates the politics of her 16th-century Scottish court while Robbie watches from afar as Queen Elizabeth I of England.

Robbie is a rising international star who broke out in Best Picture nominee “The Wolf of Wall Street” (2013), then followed that up with key roles in the Oscar-winning “Suicide Squad” (2016) and “I, Tonya” (2017). Now she has physically transformed herself to play a historical figure, which awards voters can’t get enough of, and the film climaxes with a confrontation between Mary and Elizabeth that gives Robbie the kind of showcase that would make for an ideal Oscar clip.

Robbie’s performance may next have a clear path to a nomination at the BAFTA Awards, where this British film will have a home field advantage. That might also manifest in a Best Actress nomination for Ronan, who previously earned bids there for two other performances that had been snubbed by the SAG Awards: 2007’s “Atonement” and 2009’s “The Lovely Bones.”

Could that momentum lead Robbie to not only earn an Oscar nomination, but also win? The Best Supporting Actress race is wide open after the SAG nominations, where Robbie made the cut over the presumed Oscar front-runner, Regina King. Robbie is additionally helped by what Gold Derby Editor-in-Chief Tom O’Neil has described as “the babe factor” — the tendency of the academy, which disproportionately comprises older men, to award starlets in the actress categories.

The character of Elizabeth I has been a goldmine for actors over the years. Cate Blanchett received Best Actress nominations for the eponymous role in both 1998’s “Elizabeth” and its 2007 sequel “Elizabeth: The Golden Age.” Judi Dench won Best Supporting Actress for her portrayal of the same figure in 1998’s “Shakespeare in Love.”

The monarch has also proved to be a reliably meaty role on television. Both Glenda Jackson in 1972 for “Elizabeth R” and Helen Mirren in 2006 for “Elizabeth I” won Emmys for Best Movie/Limited Actress, and Judith Anderson was nominated in 1968 for the “Elizabeth the Queen” installment of “Hallmark Hall of Fame.” Jackson also played Elizabeth in the 1971 film “Mary, Queen of Scots,” for which Vanessa Redgrave received a Best Actress nomination at the Oscars for playing Mary — another good sign for Ronan?

“Mary” could make an Oscar impact for more than its actors. At Whistler, Gratton also noted the long list of embroiderers in the end credits, which is just one indication of the film’s strength in the Oscar race for Best Costume Design. For the time being that’s the only category where Gold Derby’s collective predictions are forecasting an Oscar nomination for the film, ranking it fourth. This would be costume designer Alexandra Byrne’s third Oscar nomination for a film featuring Elizabeth I, after the aforementioned “Elizabeth” and “Elizabeth: The Golden Age,” the latter of which she won for.

The Critics’ Choice Awards recently nominated “Mary” for Best Costume Design, as well as Best Makeup and Hairstyling, a race that the film won at the Hollywood Film Awards last month. “Mary” depicts Elizabeth debilitated after contracting smallpox and features Robbie under prosthetic makeup. Makeup and hair designer Jenny Shircore also worked on “Elizabeth,” winning the Oscar. “Mary Queen of Scots” made the top-seven shortlist this week in that the category and ranks fifth in our odds, but Makeup and Hairstyling is the lone award at the Oscars with only three nomination slots.

Josie Rourke is an underdog for Best Director, but she is the second highest ranking debut filmmaker behind Bradley Cooper for “A Star is Born.” That positions her well for a nomination for Best First-Time Director at the Directors Guild Awards after no women were nominated for that prize last year. So there may yet be potential for the “Queen” to reign this awards season.