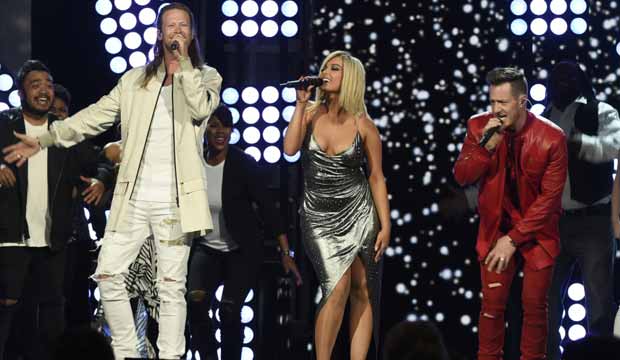 Who will be the fans’ choice for Video of the Year at the 2018 CMT Music Awards? Winners will be decided by an online vote taking place right now on CMT.com through 12:01am Eastern Time on June 4. But while Carrie Underwood holds the record for the most victories in the top category with six, our users who have entered their picks at Gold Derby thus far are betting on Florida Georgia Line and Bebe Rexha to beat her this year.

Country duo FGL and pop singer Rexha are nominated for their collaboration “Meant to Be,” which leads our predictions with 15/8 odds (watch the video above). It has been a crossover hit, reaching number-two on the Billboard Hot 100 singles chart, which made it the highest-charting single for both artists, and the highest-charting song for a country duo or group since Lady Antebellum‘s “Need You Now” in 2010.

“Meant to Be” is also the second longest running number-one hit on Billboard’s Hot Country Songs chart with 25 weeks on top — and counting. The fact that the song is so popular — and has been performing so well during the voting period — bodes well for the video when it comes to courting online fan votes.

So even though Underwood’s nominated song, “The Champion” featuring Ludacris, wasn’t as big a hit on the charts as “Meant to Be,” her fans are undoubtedly passionate, and they might come out in force for her yet again. But right now she trails in second place with 23/10 odds.

Who do you think has the advantage?