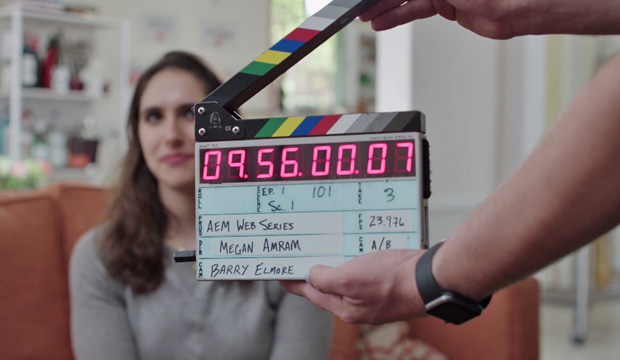 Comedy writer/Twitter superstar Megan Amram, who has worked on such Emmy favorites as “Parks and Recreation,” “Silicon Valley” and “Childrens Hospital,” is now looking to chart her own Emmy path, come hell or high water. Amram, whose day job is as a producer and writer on NBC’s “The Good Place,” is the star/creator of the new web series “An Emmy for Megan,” a hilariously meta “for your consideration” series that is the only TV show in history made exclusively to win an Emmy.

This six-episode series, all of which you can stream for free at AnEmmyforMegan.com, is being submitted in the Short Form Comedy or Drama Series category, while Amram is looking for Emmy gold in Short Form Actress. Based on the material, her plan just might work.

SEE‘The Good Place’ could have a delayed breakthrough at the Emmys this year, like ‘Parks and Recreation’ did in 2011

Amram amusingly notes in “An Emmy for Megan” that all she needs to submit the show in the short form categories at the Emmys is six scripted episodes under 15 minutes each, released before April 27. Check, check, and check. In the series she plays a fictionalized version of herself who is absolutely hellbent on winning an Emmy at all costs, to the dismay of just about everyone around her. Throughout the six episodes, Amram displays everything she thinks Emmy voters will want to see, including uncomfortable amounts of sobbing, diversity, a musical number, plot twists, and multiple Emmy-winning celebrities, including RuPaul, Ted Danson and Jimmy Kimmel. What more could the Television Academy want?

Most Emmy-nominated celebrities would humbly dismiss the idea of doing anything for awards, so there is something refreshing about watching Amram’s near-psychotic character be so open about her Emmy thirst. While the series is filled with meta moments in which the show’s version of Amram tries to pitifully show off her talents to the camera, there is a certain irony to the fact that the real Amram is a great actress in portraying these desperate moments with stellar comedic timing. Amram excels in the show’s slapstick moments (taking uppers while riding an exercise bike) and in her clueless interactions with friends (asking Ira Madison III how to “spice up my whiteness”). But Episode 5 is Amram’s crowning moment, in which she performs what can only be described as a soul-shattering rendition of the National Anthem. Quite simply, it must be seen, and heard, to be believed.

The Short Form (Comedy/Drama) Emmy categories as they exist now are still relatively fresh, beginning just two years ago. As such, there has not been any series that has campaigned so heavily in these categories until now. With profiles in “The Hollywood Reporter” and “Uproxx” and positive write-ups in “The New York Times,” “GQ,” “The Los Angeles Times” and more, Amram is just getting started. She has now put up a billboard above the Hollywood and Wilton in Los Angeles to campaign directly to Emmy voters. Suffice to say, if Amram doesn’t win at least one Emmy in September, it won’t be for lack of trying.

In the opening scene of “An Emmy for Megan,” Amram explains that upon seeing the Best Actress in a Short Form Comedy or Drama Series category at last year’s Emmys, she had one thought: “Wow, I could win that,” a deranged smile plastered across her face. Emmy voters, do not pass up the chance to give an Emmy to “An Emmy for Megan.” If only for her own sanity.