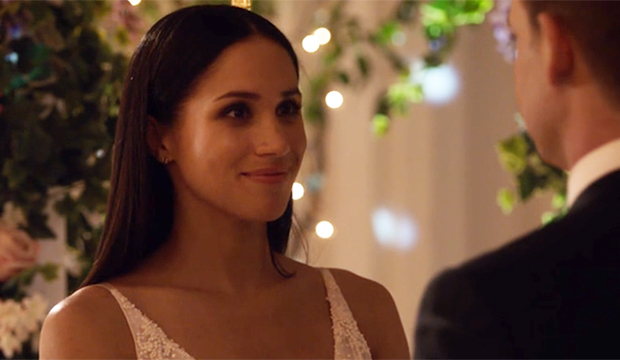 Meghan Markle may have retired from acting, but she could still get an Emmy nomination. The newly minted Duchess of Sussex is on the Emmy nominating ballot for Best Drama Supporting Actress for “Suits.”

Markle had played Rachel Zane on the USA legal drama since its inception in 2011, before leaving this spring in the Season 7 finale, along with her onscreen hubby Patrick J. Adams. She quit acting in November when her engagement to Prince Harry was announced.

Now, before you think this is her last gasp for recognition for her former career, it’s highly unlikely she submitted herself or even knows about this, let alone care. (She has different priorities now, you know?) USA has always submitted the entire main cast of “Suits” and did so again this year (yes, Adams is entered too). Are TPTB hoping the publicity it got from one of its stars marrying into the royal family will compel voters to check off the show or Markle? Probably. “Suits” is part of British history now, so there’s no reason it can’t be part of Emmy history as well.

Unfortunately, the TV academy has never nominated “Suits” in any category before. The show’s biggest awards imprint was a surprise Best Drama Actor SAG nomination for Adams during the first season.

This also isn’t the only time Markle’s name appears on the acting ballot: Parisa Fitz-Henley is entered in Best Limited Series/TV Movie Actress for playing Markle in Lifetime’s “Harry & Meghan: A Royal Romance.”