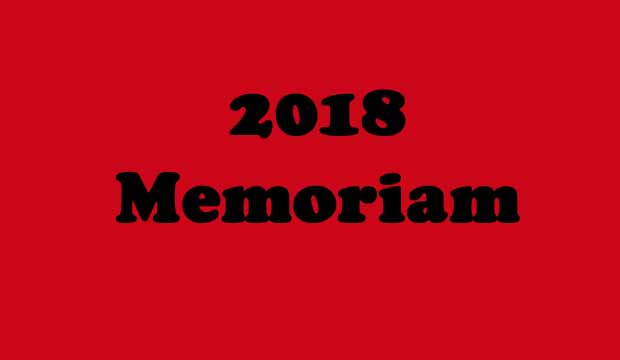 To honor Memorial Day with a tribute on Monday, Gold Derby takes a look back at celebrity and entertainment deaths so far in 2018. We are continuing to update our memoriam photo gallery above with major celebrity deaths from film, television, theater and music.

Actress Margot Kidder died at age 69 on May 13. She was best known for playing reporter Lois Lane opposite Christopher Reeve in “Superman: The Movie” (1978). She won a Daytime Emmy in 2015 for the children’s TV show “R.L. Stine’s The Haunting Hour.”

Anne V. Coates died at age 92 on May 8. She was the Oscar-winning film editor of “Lawrence of Arabia” (1962) and received an honorary Academy Award in 2016. Her other Oscar nominations were for “Becket,” “The Elephant Man,” “In the Line of Fire” and “Out of Sight.”

Actor, comedian and magician Harry Anderson died at age 65 on April 16. He was a three-time Emmy nominee for his starring role on the NBC comedy series “Night Court.” He also was the lead on “Dave’s World” and made memorable guest appearances on “Cheers.”

Steven Bochco died on April 1 at age 74. The 10-time Emmy winner was the creator of such TV classics as “Hill Street Blues,” “L.A. Law,” “NYPD Blue” and “Doogie Howser, M.D.” He was inducted into the Television Academy Hall of Fame in 1996.

Actor David Ogden Stiers died on March 3 at age 75. He was known for his long-running role as Major Charles Emerson Winchester III on “M*A*S*H.” He received two Emmy nominations for that program. He was famous for his voice-over characters in “Beauty and the Beast,” “Pocahontas,” “The Hunchback of Notre Dame” and “Spirited Away.”

Actress Nanette Fabray died at age 97 on February 22 in California. She won a Tony Award for the Broadway musical “Love Life” and three Emmy Awards for “Caesar’s Hour.” She was also known for the film musical “The Band Wagon” and TV appearances on “One Day at a Time,” “The Mary Tyler Moore Show,” and many variety shows.

Composer Johann Johannsson died on February 10 at age in Berlin. He was a Golden Globe winner for his score of “The Theory of Everything,” for which he also received Oscar, BAFTA and Grammy nominations. He received a second Oscar nomination for “Sicario” and had the acclaimed score of “Arrival.”

Actor Reg E. Cathey died on February 9 at age 59. We won an Emmy Award for his guest role on “House of Cards” and was also known for “The Wire,” “Grimm,” “Outcast,” and “The Immortal Life of Henrietta Lacks.”

Actor John Mahoney died in Chicago at age 77 on February 4. His best known role was as Martin Crane for 11 seasons on “Frasier” opposite Kelsey Grammer and David Hyde Pierce. He received two Emmy Award nominations for that show. He performed in many stage plays and in the films “Say Anything,” “The American President,” and “Barton Fink.”

Olivia Cole died on January 19 at age 75. She won an Emmy Award in 1977 for the landmark miniseries “Roots” for playing Mathilda. She received another nomination two years later for “Backstairs at the White House.” Other roles included “North and South,” “The Women of Brewster Place,” and “Coming Home.”

Oscar-winning actress Dorothy Malone died on January 19 at age 92. She won an Academy Award as Best Supporting Actress for the 1956 film “Written on the Wind.” She was also nominated for that same movie at the Golden Globes, as well as twice for her starring role on the primetime TV soap opera “Peyton Place” (1965, 1966).

Legendary sports announcer Keith Jackson died on January 12 at age 89. While he called many sports, he was best known for working hundreds of college football games for ABC. He won three Sports Emmys as Best Play-By-Play Announcer and the Lifetime Achievement Award in 1999.

Comedian and actor Jerry Van Dyke died on January 5 at age 86. His most famous role was as Luther Van Dam on the comedy series “Coach,” which brought him four Emmy nominations. Top TV guest roles included his brother’s “The Dick Van Dyke Show,” “The Andy Griffith Show,” “Yes, Dear,” “Raising Hope,” “My Name Is Earl,” and “The Middle.”