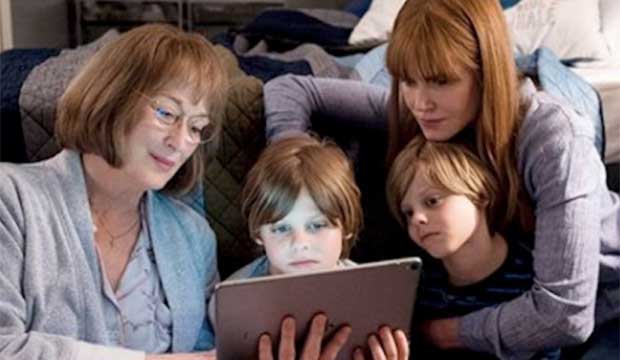 Meryl Streep may look like a kindly grandmother in this first photo from the second season of “Big Little Lies.” But looks can be deceiving. She plays Mary Louise Wright who has come to town to get answers from her daughter-in-law Celeste (Nicole Kidman) about the death of her son Perry (Alexander Skarsgard). Expect plenty of fireworks as these two women face off.

For the first time on-screen, Streep is playing a character with her real first name. Likewise, she is acting opposite Kidman for the first time. While they both appeared in “The Hours” back in 2002, they didn’t share the screen. Kidman won the Oscar for her portrayal of Virginia Woolf while Streep was snubbed by the academy. We might also see Streep working with another Oscar winner, Reese Witherspoon, who both stars and produces in this Emmy-winning HBO series.

Since her breakthrough role in the 1978 miniseries “Holocaust,” for which she won an Emmy, Streep has rarely appeared on the small screen. But when she does it is a big deal. She picked up a bookend Emmy in 2004 for her work in another HBO prestige project, “Angels in America.” And she took home a third trophy last year for her narration of the Netflix documentary “Five Came Back.”

While David E. Kelley returned to write this season of “Big Little Lies,” the helmer of season one, Jean-Marc Vallee, isn’t in the director’s chair this time around. He has been replaced by Andrea Arnold (“Transparent”).