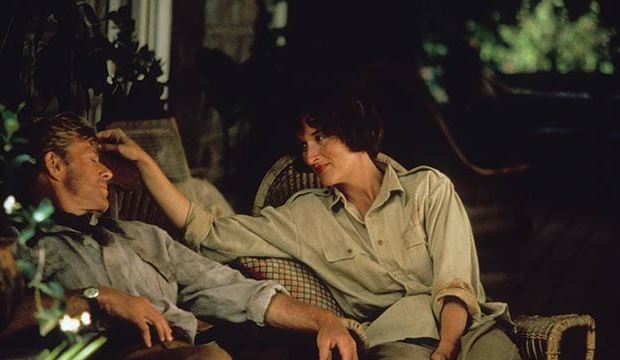 This article marks Part 6 of the 21-part Gold Derby series analyzing Meryl Streep at the Oscars. Join us as we look back at Meryl Streep’s nominations, the performances that competed with her, the results of each race and the overall rankings of the contenders.

In 1984, after making three consecutive appearances in Best Actress at the Academy Awards, Meryl Streep was a no-show on nominations morning for her turn opposite Robert De Niro in “Falling in Love.” The odds of a Streep return to the ceremony looked strong, however, in 1985. Two projects were lined up, both awards-caliber on paper.

The first of these two projects landed with a whimper that September. “Plenty,” directed by acclaimed Australian filmmaker Fred Schepisi, with a screenplay by David Hare, cast Streep as an Englishwoman searching for fulfillment in life after serving with the French Resistance in World War II. While the film has its passionate defenders to this day, “Plenty” garnered a lukewarm reception upon release.

“Plenty” would be long out of theaters by the time Streep’s second picture hit the big screen in December. This one, thankfully, was a big, fat hit. Working under the direction of Sydney Pollack and alongside leading man Robert Redford, Streep was about to headline her first Best Picture Oscar winner since “Kramer vs. Kramer” (1979).

The 1985 Oscar nominees in Best Actress were:

Anne Bancroft, “Agnes of God”
Bancroft portrays the domineering Mother Miriam Ruth who clashes with Dr. Livingston (Jane Fonda), the court-appointed psychiatrist sent to evaluate Sister Agnes (Oscar nominee Meg Tilly), a young nun found in her room, covered in blood beside a dead baby. Livingston’s investigation into what happened is constantly interrupted by the overbearing Mother Miriam, who seems to know more about the tragedy than she’s willing to admit. This performance marked Bancroft’s fifth and final Oscar nomination.

Whoopi Goldberg, “The Color Purple”
Goldberg portrays Celie Johnson, an African-American woman grappling with life in rural Georgia over the first half of the 20th century. At age 14, Celie is raped and impregnated by her father (Adolph Caesar), who forces her into a marriage with the comparably abusive “Mister” Albert (Danny Glover). Celie spends all too much of her adulthood subjected to Albert’s violence and the rampant racism of the south. Events, however, like the entrance of the colorful and strong-willed Shug Avery (Oscar nominee Margaret Avery) give Celie reason to keep on going. This performance, which won her Best Actress honors from the Golden Globes and National Board of Review, marked Goldberg’s first Oscar nomination.

Jessica Lange, “Sweet Dreams”
Lange portrays Patsy Cline, the talented and beautiful country singer who, early in her career, is stuck in a loveless marriage and relegated to the most unrewarding of gigs. After meeting and falling for the charming Charlie (Ed Harris), Patsy ditches her dud of a husband, marries Charlie and at last starts to find success as a musician. Just as her star is rising, however, her marriage to Charlie goes downhill and, at age 30, tragedy strikes. This performance marked Lange’s fourth Oscar nomination.

Geraldine Page, “The Trip to Bountiful”
Page portrays Carrie Watts, a high-spirited senior citizen who bolts from her tiny apartment, over the objections of her obnoxious son and daughter-in-law, to venture on a bus trip to visit her childhood home one last time in Bountiful, Texas. On the way, she befriends Thelma (Rebecca De Mornay), a young woman who is fascinated by Carrie’s memories from the past. This performance marked Page’s eighth and final Oscar nomination and first victory.

Meryl Streep, “Out of Africa”
Streep portrays aristocrat Karen Blixen who, alongside husband Bror (Oscar nominee Klaus Maria Brandauer), moves to Africa with the intention of opening a dairy farm. Things don’t quite go as planned, however – Bror instead uses Karen’s wealth to invest in a coffee plantation and engages in extramarital affairs that ultimately lead to Karen contracting syphilis from her husband. Karen leaves Bror and becomes involved with the dashing Denys (Redford), a big-game hunter who adores her but has little interest in marriage. This performance, which won her Best Actress honors from the Los Angeles Film Critics Association, marked Streep’s sixth Oscar nomination.

1985 was, of course, the infamous year in which the Academy showered Steven Spielberg‘s “The Color Purple” with heaps of affection on Oscar nominations morning – 11 nominations in total – only to award it with an across-the-board shutout on the big night. Among the losers was Goldberg who, at the time, marked only the fifth African American to grace Best Actress at the Oscars. We’ll get to her in a little bit.

Let’s first start with Bancroft, a remarkable actress, whose stirring turn in “The Miracle Worker” (1962) is one of the all-time great performances to win the Best Actress prize. Her work in “Agnes of God,” unfortunately, is not on that same level. Bancroft’s Mother Superior from Hell recalls Rosalind Russell‘s over-the-top turn as a Mother Superior in the “Angels” films of the 1960s. The difference, of course, is Russell’s performance worked and was entertaining in a comedy like “The Trouble with Angels” (1966). In an overwrought drama like “Agnes of God,” Bancroft’s histrionics are distracting and unpleasant.

Bancroft does have one nice scene, where Mother Miriam lets loose a bit with Dr. Livingston by indulging in a cigarette. It’s the only moment with some levity in this maudlin picture.

As for Streep’s sixth Oscar-nominated performance, it’s closer in quality to “The French Lieutenant’s Woman” (1981) than “Sophie’s Choice” (1982).

While there’s much to like about the Pollack picture, including David Watkin‘s sumptuous photography and the stunning John Barry music, the proceedings move like molasses and are at least half an hour too long. Streep and Redford have dynamite chemistry but have delivered far more compelling performances in other work. It’s actually Brandauer who gives the one amazing performance here and arguably should have earned the Best Supporting Actor prize over Don Ameche (“Cocoon”). How strange to see “Out of Africa” sweep and yet not score a trophy for its best performance.

Like Ameche, Page was able to withstand the “Out of Africa” lovefest and finally score her Oscar victory.

“The Trip to Bountiful” finds Page in fine form, even if the film around her, like “Out of Africa,” is a little sleepy. The flair-free direction by B-movie director Peter Masterson and high school-play level of acting by the rest of the ensemble don’t much help, other than to perhaps make Page look all the better. Much like Bancroft, Page’s late-career turns tended to become more and more affected but here, she actually reigns it in quite nicely, while still turning in a lively and colorful performance.

Presenter F. Murray Abraham wasn’t far-off when he opened up that envelope on Oscar night and gleefully proclaimed Page “the greatest actress in the English language.” That said, “The Trip to Bountiful” isn’t quite a performance at the same level of “Sweet Bird of Youth” (1962) and “Interiors” (1978), for which Page was also Oscar-nominated.

On the heels of the grand success of “Coal Miner’s Daughter” (1980), it was all but inevitable Hollywood would pump out a similar biopic on Patsy Cline, who perished in a tragic plane crash at the mere age of 30. “Coal Miner’s Daughter” was a solid, if workmanlike picture but “Sweet Dreams” struggles to even reach those modest heights.

“Sweet Dreams” isn’t without its pleasures. It does feature a rich, Oscar-caliber supporting turn from the great Ann Wedgeworth as Cline’s mother and also sports an impressive early Ed Harris appearance. Lange is in good but not great form here. In part due to the poor lip-syncing to the old Cline tunes, Lange just isn’t very convincing. She has several nice scenes with both Wedgeworth and Harris but ultimately doesn’t transcend the disheveled production around her, like she so masterfully did three years prior in “Frances” (1982).

Ultimately, the only exceptional performance recognized here is Goldberg, in her film debut, absolutely killing it in Spielberg’s splendid “The Color Purple.”

This is a legitimate powerhouse of a performance, a harrowing master class in acting from someone who somehow hadn’t done a whole lot of acting beforehand. We feel Celie’s suppressed anger toward Albert and society and want to leap out of our seats for a standing ovation when she at last stands up to her husband. We’re overcome by the same onslaught of emotions when Celie discovers all of the letters from her sister that Albert had for years hidden from her. And we’re of course bursting into tears and applause at the film’s sublime conclusion.