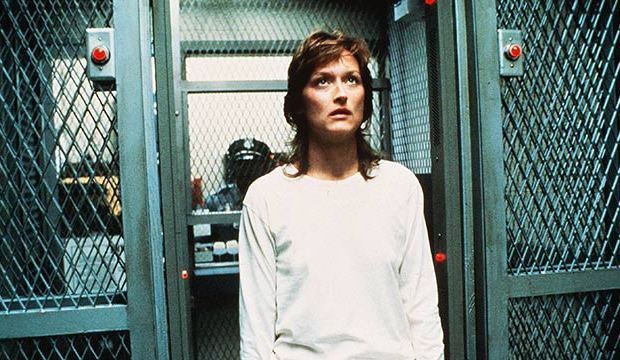 This article marks Part 5 of the 21-part Gold Derby series analyzing Meryl Streep at the Oscars. Join us as we look back at Meryl Streep’s nominations, the performances that competed with her, the results of each race and the overall rankings of the contenders.

In her first eight appearances on the big screen, Meryl Streep portrayed a diverse array of characters, all fictional. In 1983, she at last took on a real-life role, that of the plutonium technician-turned-nuclear safety whistleblower Karen Silkwood in “Silkwood” and was rewarded with an Academy Awards nomination for her efforts.

The project marked Streep’s first of four collaborations with filmmaker Mike Nichols and first of three with screenwriter Nora Ephron.

No one had more riding on the success of “Silkwood” than the picture’s director. After a string of acclaimed box office hits in the late 1960s and early 1970s, including “Who’s Afraid of Virginia Woolf” (1966), “The Graduate” (1967) and “Carnal Knowledge” (1971), Nichols stumbled with two misfires: “The Day of the Dolphin” (1973) and “The Fortune” (1975). He left Hollywood for Broadway, where at this point in his career he’d already racked up five Tony Awards for Best Direction of a Play.

Sans his direction of the stage-to-screen production “Gilda Live” (1980), Nichols did not direct any feature film between 1975 and 1983. “Silkwood” not only garnered critical acclaim but solid box office receipts to boot, knocking “Terms of Endearment” from the top slot after that film spent four consecutive weeks as the highest grosser. “Terms” would, however, soon get its revenge on Oscar night.

The 1983 Oscar nominees in Best Actress were:

Jane Alexander, “Testament”
Alexander portrays Carol Wetherly, a wife and mother whose quiet suburban existence is irreversibly shattered by the onslaught of nuclear war. Cities across the United States, including nearby San Francisco, are hit, and while residents try to proceed with business as usual for some time, it is not long before many, particularly children and the elderly, fall gravely ill. Carol guides her family and other stranded survivors toward a future with no light at the end of the tunnel. This performance marked Alexander’s fourth Oscar nomination.

Shirley MacLaine, “Terms of Endearment”
MacLaine portrays Aurora Greenway, the brash but loving mother of Emma (Debra Winger). Aurora’s relationship with her daughter has its share of tumultuous moments, especially on the heels of Emma’s marriage to Flap (Jeff Daniels), a man Aurora isn’t terribly fond of. Aurora also finds love, becoming romantically involved with the charming former astronaut (Jack Nicholson, in an Oscar-winning turn) who for years has lived next door without much interaction. This performance, which also won MacLaine a Golden Globe and Best Actress honors from the Los Angeles Film Critics Assn., National Board of Review and New York Film Critics Circle, marked her sixth Oscar nomination and first victory.

Meryl Streep, “Silkwood”
Streep portrays Karen Silkwood, a nuclear facility technician who lives alongside boyfriend Drew (Kurt Russell) and friend and co-worker Dolly (Oscar nominee Cher). A union activist with concerns about nuclear plant safety practices, Karen believes her employers are placing her and fellow personnel at risk of radiation contamination. With union officials of negligible help, Karen investigates on her own and comes across evidence that could bring down the nuclear site but also place her at great risk. This performance marked Streep’s fifth Oscar nomination.

Julie Walters, “Educating Rita”
Walters portrays Rita, a twentysomething hair dresser, with a dud of a husband, who decides to go back to school before having children. She studies with Dr. Bryant (Michael Caine), an alcoholic professor of literature who lost passion for teaching long ago but is completely won over by Rita’s enthusiasm. Before long, Rita sees Dr. Bryant as her hero and he sees her as the apple of his eye. This performance, which won Walters a BAFTA Award and Golden Globe, marked Walters’ first Oscar nomination.

Debra Winger, “Terms of Endearment”
Winger portrays Emma Greenway Horton, daughter of the strong-willed Aurora (MacLaine) and wife of the mild-mannered Flap (Daniels). Emma has roller coaster rides of relationships with both. Her marriage sours on account of Flap’s cheating, which leads to Emma briefly taking on a lover (Oscar nominee John Lithgow) of her own. Tragedy strikes when Emma is diagnosed with terminal cancer, a development that draws her closer than ever to Aurora and Flap. This performance, which won Best Actress honors from the National Society of Film Critics, marked Winger’s second Oscar nomination.

Overlooked Contenders: Anne Bancroft, “To Be or Not to Be”; Louise Fletcher, “Brainstorm”; Mariel Hemingway, “Star 80”

1983 was a rough awards season, even with some of the Oscar winners being quite great. This was a season in which “Flashback” was garnering recognition from left and right and slight performances like Tom Conti in “Reuben, Reuben”; Charles Durning in “To Be or Not to Be”; and Amy Irving in “Yentl” scored Oscar nominations. There is also Lithgow, the epitome of a coattail nomination for “Terms of Endearment.”

Best Actress, thankfully, was a mostly splendid affair in 1983, nearly on-par overall with the leading ladies from the year prior, even if none of the turns is quite on the level of a Jessica Lange in “Frances” or Streep in “Sophie’s Choice.”

Even the weakest of the five, Julie Walters, is still quite strong. Walters, as always, is fabulous in “Educating Rita.” The problem is, the film, based on a 1980 stage play (which was a two-person show, unlike the film, which is packed with new and essentially unnecessary supporting characters) has a stagebound and claustrophobic feel that workers against both Walters and Caine. While it’s great the success of “Educating Rita” opened up career opportunities for Walters, this isn’t the best Walters performance.

Beyond Walters, this is an epic line-up.

Oscar nomination number two for Winger was a nice step-up from the doldrums of “An Officer and a Gentleman” (1981). She has plenty of remarkable moments in “Terms of Endearment,” most of them in the second half. The real killer of a scene is of course Emma’s final conversation with sons Teddy and Tommy in the hospital. Winger plays it pitch-perfectly there, as does she in the devastating last scene with MacLaine – her facial expressions say everything. She has several great moments earlier in the film with both Daniels and Lithgow too.

When it comes to restrained acting, Winger is on-point but she still hasn’t a thing on that quiet scene-stealer Jane Alexander. If you found her Oscar-nominated Supporting work in “All the President’s Men” (1976) and “Kramer vs. Kramer” (1979) invigorating, just wait ’til you discover her leading turn in “Testament.”

1983 was a big year for nuclear war cinema. There were two much-discussed, Emmy winning television specials – “The Day After” and “Special Bulletin” – and then a big screen feature, “Testament.” Sadly, none of the three holds up incredibly well but the most compelling and moving of the trio is “Testament,” even if it too has the look and feel of a TV movie.

Unlike those two aforementioned TV projects, “Testament” has a performer willing to take on considerable heavy-lifting. Indeed, Alexander is really the only reason to seek out the picture but, for her turn alone, “Testament” becomes something of a must-see.

What’s so powerful and ultimately overwhelming about Alexander’s performance is the sense of just how deep Carol goes in suppressing her emotions – that is, her commitment to remaining cool while the world around her is literally exploding. There comes a point when Carol at last loses it and the moment is equal parts heartbreaking and cathartic. Alexander is astonishing but the film around her does not operating on the same level, unfortunately.

Decidedly not middling is “Silkwood,” one of the very best Nichols films and, in a close call with “When Harry Met Sally…” (1989), perhaps the best Ephron script. Cher is phenomenal in her breakout big screen appearance and Kurt Russell doesn’t get nearly enough credit for his fine work.

Streep is, of course, splendid as well. The performance and film, for obvious reasons, recall Sally Field in “Norma Rae” (1979), though the Nichols picture is ultimately even more absorbing and infuriating. Like watching a superhero flick, the audience is cheering and on the edge of their seats for Karen from start and finish and Streep is convincing throughout. This is among the five best Oscar-nominated Streep performances.

Alas, the academy got this one right.

Some tend to view the MacLaine victory as something of a career win, which makes some sense, given how absurdly overdue she was at the time. To write it off as a mere “she was just due” win, however, is completely unfair, given how magnificent she is in “Terms of Endearment.”

MacLaine’s scenes with Nicholson are a delightful hoot – you can tell how much of a ball these two had finally working together. Her performance really comes to life, however, in the film’s second half, with the onset of Emma’s illness. The famous “give my daughter the shot” moment is of course legendary but just as affecting is Aurora knocking some sense into Tommy outside the hospital; her lunch with Flap; and Aurora’s final moments with her daughter. The turn is a masterful blend of hilarity and heartbreak. It’s career-best work.