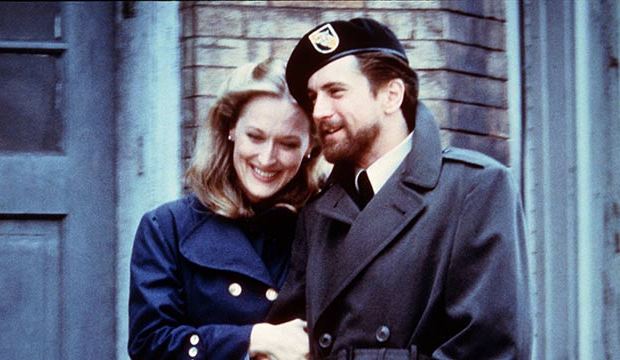 This article marks Part 1 of the 21-part Gold Derby series analyzing Meryl Streep at the Oscars. Join us as we look back at Meryl Streep’s nominations, the performances that competed with her, the results of each race and the overall rankings of the contenders.

Prior to 1978, Meryl Streep was best-known for her acclaimed New York stage work. She made five Broadway appearances between 1975 and 1977, including a turn in “A Memory of Two Mondays/27 Wagons Full of Cotton” (1976) that brought Streep her first – and to date, only – Tony Award nomination. Her sole big screen appearance was a small, albeit memorable, turn opposite Jane Fonda in “Julia” (1977).

Streep’s name recognition increased significantly in 1978. First, there was her much-heralded performance in the epic NBC miniseries “Holocaust” that resulted in an Emmy Award. It was her second-ever appearance in a feature film, however – and in a Best Picture Academy Awards winner, no less – that really put Streep on the map and awarded her with the first of her 21 (so far) Oscar nominations.

The 1978 Oscar nominees in Best Supporting Actress were:

Dyan Cannon, “Heaven Can Wait”
Cannon portrays Julia Farnsworth, a scheming shrew of a wife who is flabbergasted when her wealthy husband – who she thought she’d drowned to death – suddenly re-appears. Cannon won the Golden Globe for this performance, which marked her third Oscar nomination.

Penelope Milford, “Coming Home”
Milford portrays Viola “Vi” Munson, a free-spirited party girl who befriends Sally Hyde (Fonda, in an Oscar-winning turn) when their respective partners are shipped off to Vietnam. Vi and Sally both work at the local military hospital, where the former spends much of her time bonding with brother Bill (Robert Carradine), who was discharged from service after mere weeks abroad for mental health reasons. This performance marked Milford’s first Oscar nomination.

Maggie Smith, “California Suite”
Smith portrays Diana Barrie, a washed-up British actress who is at last nominated for Oscar in Best Actress. She is convinced a victory will lead to a revival in her career but supremely skeptical she can actually win. Barrie rides a roller coaster of emotions, alongside husband Sidney (Michael Caine), in the lead-up to and aftermath of the big ceremony. Smith won the Golden Globe (in Best Comedy/Musical Actress, tied with Ellen Burstyn for “Same Time, Next Year”) for this performance, which marked her fourth Oscar nomination and second victory.

Maureen Stapleton, “Interiors”
Stapleton portrays Pearl, an effervescent firecracker of a woman whose presence rattles the family of husband-to-be Arthur (E.G. Marshall) upon her introduction. Arthur’s children are still reeling from his separation from depressed matriarch Eve (Geraldine Page), not to mention a suicide attempt by their mother, and are hardly keen on future stepmother Pearl. Stapleton scored honors from the Los Angeles Film Critics Assn. and New York Film Critics Circle for this performance, which marked her third Oscar nomination.

Meryl Streep, “The Deer Hunter”
Streep portrays Linda, fiancee of Nick (Oscar winner Christopher Walken) but the apple of Mike (Robert De Niro)’s eye. With Nick AWOL in Vietnam, Mike returns home to their small, working-class town in Pennsylvania, where he grows close to Linda, both of them distraught over the missing man. Streep garnered honors from the National Society of Film Critics for this performance, which marked her first Oscar nomination.

1978 marked a remarkable year at the Oscars, especially in the acting categories. Just look at Best Actress, for instance:

Yowsa. All of them could’ve been Oscar-winning turns in the right year. Same goes for losing nominees De Niro (“The Deer Hunter”), Bruce Dern (“Coming Home”) and the electrifying Gary Busey (“The Buddy Holly Story”). Best Supporting Actress was exceptional too.

First, the two weakest links here – Cannon and Milford – are still fine, commendable performances. They’re just not among the more memorable parts of their respective films.

Cannon’s Julia is a minor presence in “Heaven Can Wait” – it’s a far less meaty turn that her first Oscar-nominated performance, in “Bob & Carol & Ted & Alice” (1969). Cannon does have terrific comic timing but the screen time isn’t quite there to warrant awards recognition.

Likewise, Milford, while convincing and a nice screen presence, is not among the most compelling parts of “Coming Home.” Carradine, as Vi’s brother, actually leaves a bit more of an impression, and with significantly less screen time. Milford is a classic case, like Talia Shire in “The Godfather Part II” (1974) and Kathleen Quinlan in “Apollo 13” (1995) of a rather modest performance riding her film’s momentum to an Oscar nomination.

The other three performances are all fantastic. Smith’s film, however, is a far inferior picture to those of her competitors.

“California Suite,” while a hit at a time, has not held up well. The film follows four pairs of guests who are visiting Los Angeles from New York (Jane Fonda and Alan Alda), Chicago (Richard Pryor and Bill Cosby), Philadelphia (Elaine May and Walter Matthau) and London (Smith and Caine). The scenes featuring the Chicago and Philadelphia duos are labored and unfunny, while the scenes with Fonda and Alda are dull and sluggish.

To be fair, the scenes involving Smith and Caine are great but it’s tough to fully appreciate them when three-fourths of the film they’re in is so middling. It’s a shame director Herbert Ross and writer Neil Simon didn’t opt to scrap the rest of the film and just shoot an entire picture around the Brits.

As for the remaining two, “The Deer Hunter” and “Interiors” are among the very best films of 1978, with both Streep and Stapleton in prime form.

Stapleton enters “Interiors” like a tornado, lifting the film into something even more extraordinary. It’s an even better turn that her Oscar-winning one for “Reds” (1981) a few years later.

Streep is also marvelous, with several immensely moving, heartbreaking moments in “The Deer Hunter.” It’s a lovely, lived-in performance, though she doesn’t quite walk away with her scenes in the same awe-inspiring fashion Stapleton does.