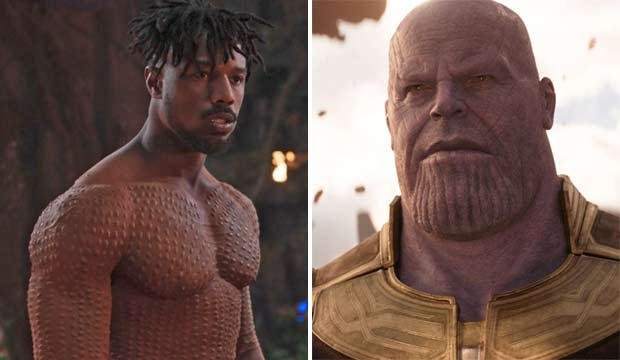 Michael B. Jordan (“Black Panther”) is the MTV Movie and TV Awards front-runner for Best Villain, according to the combined predictions of hundreds of Gold Derby users. But can he really take down Thanos? He goes head-to-head against Josh Brolin, who is arguably the biggest big-bad in the Marvel Cinematic Universe.

“Black Panther” is the most critically acclaimed of the Marvel movies, thanks in part to the complexity of its villain, Erik Killmonger, whose motives actually ring true: he’s a vengeful social justice warrior who resents the highly advanced, but isolationist nation of Wakanda for turning its back on black suffering throughout the world. However, his plan is to use Wakanda’s might to enslave the world as Africans were enslaved, and the title superhero couldn’t stand for world domination.

But if fans are voting based on the sheer grandeur of a villainous scheme, it’s tough to top Thanos. He doesn’t want to rule the world; instead, he plans to obliterate half the population of the entire universe. And Brolin could be doubly popular with fans since he can also be seen in theaters as time-traveling vigilante Cable in “Deadpool 2” as online voting for the MTV winners is underway — as long as Thanos doesn’t snap away the half of the audience that was planning to vote for him.

However, Brolin is only predicted to win by one Top User and two All-Stars, placing him third with 5/1 odds. So perhaps the biggest threat to both Jordan and Brolin is that they will split the vote of Marvel fans, leading to an upset victory by Bill Skarsgard as the homicidal clown in “It.” Skarsgard currently ranks second in our predictions with 7/2 odds based on support from six Top Users and five All-Stars.

And he wouldn’t be the first horror villain to win. This award has previously gone to scary killers like Kevin Spacey (“Seven”), Daveigh Chase (“The Ring”) and just last year Jeffrey Dean Morgan (“The Walking Dead”).

Do you agree with our MTV Awards consensus that Jordan is the bad guy to beat? Or are we underestimating his rivals?

'Judas and the Black Messiah' production designer Sam Lisenco: Staying true to history with the…

Jason Woliner ('Borat 2 director'): Sacha Baron Cohen returned 'because of Trump and Trumpism and what…

Sophia Loren is one of 12 Oscar winners for non-English performances: Will she be lucky 13th as well?