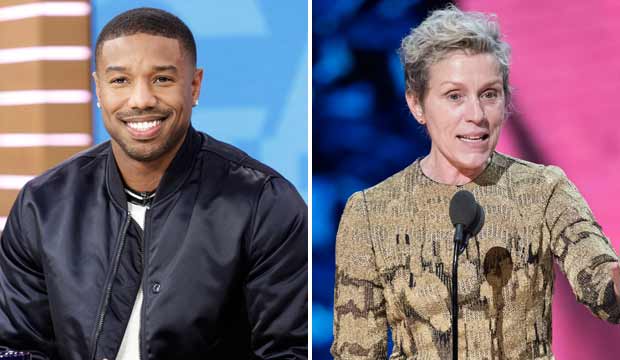 “I have two words to leave with you tonight, ladies and gentlemen: inclusion rider,” said Frances McDormand at the end of her Oscars acceptance speech for Best Actress on March 4. It was the speech that launched a thousand Google searches: “What the heck is an inclusion rider?” But when all is said and done those two words may be remembered as the two most important words in Hollywood’s equality movement since “Me Too.” On March 7 Michael B. Jordan has announced that he will be adding an inclusion rider to all projects produced by his company Outlier Society. Scroll down to see his complete Instagram announcement.

An inclusion rider is a provision that can be added to a contract requiring that a project meets certain diversity standards in its hiring for jobs in front of and behind the camera. So while it may have seemed odd to win an Oscar and then allude to contract law, it was also a rare moment when acceptance-speech advocacy included a concrete plan of action for achieving equality. Women, people of color, and other marginalized groups can’t win Oscars if they can’t get hired in the first place, and McDormand — and now Jordan — are putting their money where their mouths are to create that change from the ground up. Time will tell how much change that will yield and in what time frame. I suspect we’ll see more announcements like Jordan’s going forward.

We’ve already seen the kind of success you can generate with diverse hiring. Just look at the critical and commercial success of Jordan’s own film “Black Panther,” whose director is black (Ryan Coogler, who also directed Jordan in “Fruitvale Station” and “Creed”) and which features a number of women in key roles both on and off screen, including cinematographer Rachel Morrison, who made Oscar history this year as the first woman ever nominated for Best Cinematography.

What do you think of the inclusion rider? Do you think it will have a significant impact on the entertainment industry?