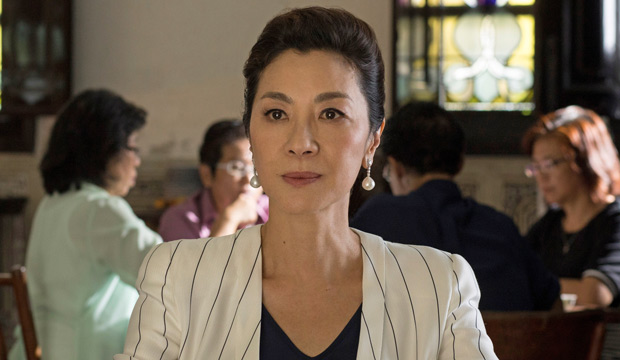 Michelle Yeoh is earning major Oscar buzz for the first time since her iconic work in 2000’s “Crouching Tiger, Hidden Dragon” thanks to her memorable performance in “Crazy Rich Asians.” As Eleanor Young, stubborn matriarch to an uber-successful Singapore family, Yeoh earned a great deal of acclaim from critics, who have lavished praise on her tough yet vulnerable take on a character who could easily verge into two-dimensional villainy. The relatable conflict between Eleanor and her son’s new girlfriend Rachel (Constance Wu) is a major part of the appeal of “Crazy Rich Asians,” which has become one of the biggest box office smashes of 2018. Now, as Oscar season approaches, Yeoh is well on her way to potentially becoming the first Asian actress nominated in 12 years.

While Yeoh’s Eleanor is presented as the principal antagonist of “Crazy Rich Asians,” the film smartly allows us to see what’s behind the veil of the tough ice queen. The first scene of the film shows Eleanor being subject to discrimination, giving us a taste of what she has had to go through to make her way to the top. Eleanor gets to be unintentionally funny in her strict attitude throughout the film, but even in scenes where Eleanor and Rachel are most at odds, Yeoh beautifully shows the motivation behind her character as she tells Rachel she will “never be good enough” for her son. Layers continue to be peeled back as we see how Eleanor’s mother-in-law showed cold feelings towards her, an uneasy resentment that persists even in the present. The film ends with a mutual understanding between Eleanor and Rachel, so that even those who disliked Yeoh’s character for much of its runtime leave feeling warmed by her.

It’s been 18 years since Yeoh was seriously in the hunt for Oscar, having received nominations at BAFTA and various critics organizations for “Crouching Tiger, Hidden Dragon.” While she did not ultimately earn an Oscar nomination, she was the co-lead of a film academy voters clearly loved, having given the film four trophies. Since then, she has been seen in films ranging from “Memoirs of a Geisha” to “Guardians of the Galaxy Vol. 2” as well as TV shows that include “Strike Back,” “Marco Polo” and most recently, “Star Trek: Discovery.” But “Crazy Rich Asians” has given Yeoh greater buzz as an actress than any role she’s taken in years, as seen by her many profiles released this summer. Her performance is a classic icy mother role we’ve seen the Oscars embrace time and time again, and combined with the film’s incredible box office ($230 million worldwide and counting), Yeoh has vaulted into the top 10 of Best Supporting Actress contenders according to Gold Derby’s odds.

SEE‘Crazy Rich Asians’ has a crazy good 2nd weekend at the box office, so will Hollywood stop underestimating people of color

Embracing Yeoh would not just acknowledge her stellar performance in “Crazy Rich Asians” but also finally recognize an Asian actress after a depressing 12-year drought. Japanese Rinko Kikuchi (“Babel”) remains the most recent actress of Asian descent nominated at the Oscars in 2006. Kikuchi is one of only five Asian actresses nominated for an Oscar in the academy’s 90-year history, joining part-Indian and Maori Merle Oberon for “The Dark Angel” in 1935, Japanese Miyoshi Umeki for “Sayonara” in 1957 (the only to win), and half-Chinese sisters Meg Tilly for “Agnes of God” in 1985 and Jennifer Tilly for “Bullets over Broadway” in 1994. Yeoh would be the first Malaysian actress nominated for an Oscar.

While great strides have been made to broaden the scope of actors nominated in the wake of #OscarsSoWhite, Dev Patel (“Lion”), who is of Indian descent, is the only Asian actor or actress this decade to earn an Oscar nomination. With the academy opening up its membership to a more diverse group of artists, it’s possible that Yeoh’s nomination prospects look better now than they would have just three years ago. What also helps Yeoh is that she is likely to be the representative for “Crazy Rich Asians” for fans of the movie to rally behind. As a veteran working in the industry for over 30 years, she is one of the top actors voters will know from the film, and she has arguably earned the most acclaim from its ensemble. Best Supporting Actress may be turning into a competitive category full of former Oscar nominees and winners, but Yeoh is the perfect archetype of seasoned actress who has a strong shot of finally earning her due, if voters rightfully rally behind her.