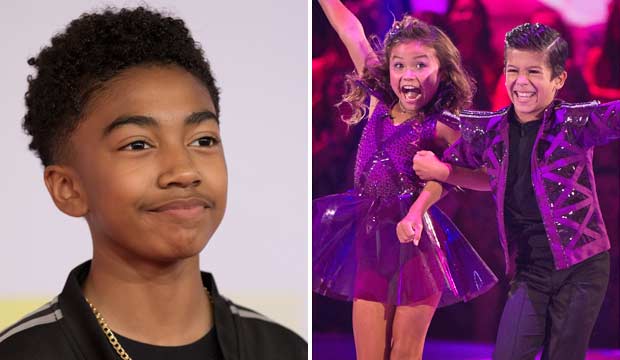 After week one of “Dancing with the Stars: Juniors” the battle for the Mirror Ball Trophy looked like a close contest between “Black-ish” actor Miles Brown and skateboarder Sky Brown, according to the combined predictions of Gold Derby users. But things have changed since week two: it’s not so close anymore. Miles now gets leading odds of 10/3, while Sky is in runner-up position with 9/2 odds. Can Sky kickflip her way back to the top?

In the series premiere episode both Browns impressed the judges, but neither of them actually topped the leaderboard. Both Miles and Sky scored 22 out of 30, which was two points behind Mandla Morris and Ariana Greenblatt‘s first-place scores. Nevertheless, Miles showed tons of charisma, and Sky had the benefit of performing last, which is often a sign of whom the producers favor because getting that last dance slot keeps you freshest in mind when the audience votes.

Miles improved his scores in week two, tying Greenblatt and Mackenzie Ziegler for the top spot with a total of 24. Sky held steady with another score of 22, but this time that left her tied with Mandla Morris in fourth place. There were actually just five points separating first place from last place in week two so this season remains fairly evenly matched, at least as far as the judges are concerned.

The contestant who should really worry the Browns is green. In both weeks of the competition thus far, Greenblatt — who played young Gamora in “Avengers: Infinity War” — tied for the top spot. However, we’re underestimating her with fifth-place odds of 5/1. Is she really that far behind after two great routines?