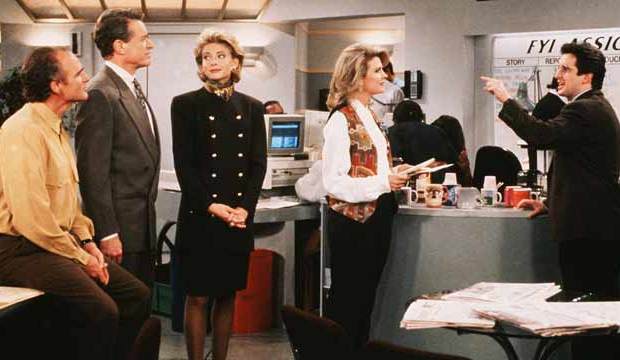 The “FYI” gang is back together again. Candice Bergen has shared the first photo from the set of CBS’ upcoming “Murphy Brown” revival on Instagram. The shot features Bergen with returning stars Faith Ford, Joe Regalbuto and Grant Shaud, along with newcomer Nik Dodani, and writer and creator Diane English.

“MURPHY BROWN…together again,” Bergen captioned the post. “Coming to your neighborhood TV in the fall. Just in time…”

MURPHY BROWN…together again. Coming to your neighborhood TV in the fall. Just in time…

Conspicuously absent from the photo is Jake McDorman, who will play the adult version of Murphy Brown’s son, Avery, who’s following in his mom’s journalistic footsteps.

In January, CBS joined the revival craze and picked up the sitcom for a 13-episode installment, set to premiere next season. The original series, following Bergen’s titular investigative reporter at the fictional “FYI” newsmagazine, premiered 30 years ago and ran for 10 seasons. The revival will find Murphy in a whole new world of cable news, social media and fake news.

Bergen won a then-record-tying (with Mary Tyler Moore) five Best Comedy Actress Emmys during the original run before she famously withdrew her name from consideration. It’s unknown if she will submit herself for next year’s race, which could pit her against the woman who shattered the record in the category: Julia Louis-Dreyfus, who has seven Emmys, including six for “Veep.”