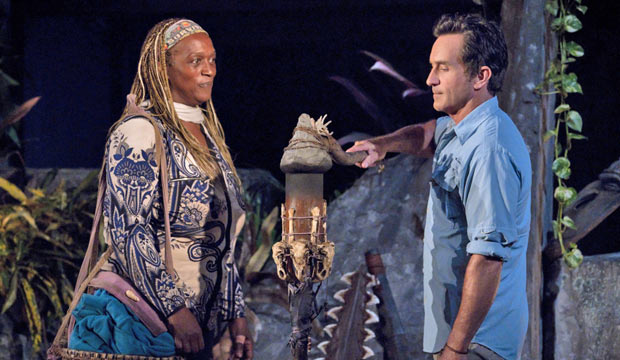 Following her recent elimination from “Survivor: David vs. Goliath,” Natalie Cole isn’t holding anything back. In her exit interview with Gold Derby (read it below) Natalie readily admits that she has “no regrets” about not giving her jacket to Angelina Keeley after she begged and pleaded for it. Natalie calls Angelina “clueless” for even asking, adding that she’s the “least trustworthy” player in the game. Also in our Q&A Natalie discusses her “over the top negative” edit and who she ultimately wants to win the $1 million prize.

GOLD DERBY: Do you have any regrets about not giving Angelina your jacket? She was freezing cold and her teeth were chattering!

NATALIE COLE: No, I have no regrets. She did not support me. She shared information throughout the game, some of which were lies that I was able to verify. She voted me out expressly for my jacket so why should I care for her comfort? Mike never made a decision while in the game. Angelina had to make the call to vote me out.

GD: After the votes were read, what was going through your mind when Angelina kept saying your name over and over?

NC: That she is clueless if she believes that I did not know that she is the cause that I am being voted out. I knew before we got to tribal council that I was being voted out. She had private conversations with Lyrsa then lied as to the nature of their conversation. Mike was whispering with Nick. Then Lyrsa goes to Nick and whispers. What was there not to know? It was too late to fight it.

GD: Sitting here today, which person do you feel most betrayed by and why?

NC: Angelina was the least trustworthy; I never had her support, and she pretended to be my friend.

GD: How do you feel about your edit – about the way you came off on television?

NC: The edit was over the top negative. The narrative was told within contextualized content, dramatic emotion stirring music, soundbites with the scene viewers were seeing and all of such happening mutually inclusive was very powerful in directing the viewer experience. Therefore, it is not really “how I came off” but more so, how the narrative unfolded. It was great work for the producers as it made for an exciting season. Am I remotely similar to the character on “David vs. Goliath”? No.

GD: If you could go back and do it all over again, what would you do differently?

GD: Now that you’re out of the game and you’re a viewer, who are you personally rooting for to win the $1 million prize?

NC: For the Jabenis I left on the island, I root for the Mike and Nick. For all of the others still there, John, Davie or Alison.