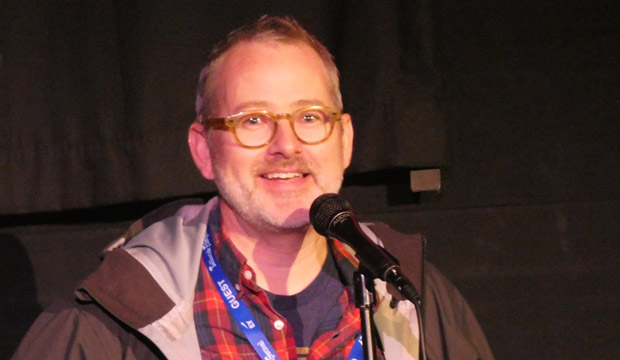 What do neighborly Fred Rogers and curmudgeonly Orson Welles have in common? Not a great deal, to the naked eye. But filmmaker Morgan Neville has quickly followed up his hugely successful movie about Citizen Rogers, “Won’t You Be My Neighbor,” with a film about Mister Welles’ neighborhood, “They’ll Love Me When I’m Dead.” And he swears there are some common threads to be found between Fred Rogers’ soothing cardigan and the intimidating cape that Welles was fond of wearing in his later years.

Neville’s film premiered in Telluride this weekend as part of a virtual festival-within-a-festival – call it OrsonCon. The main draw for cineastes has been the North American premiere of “The Other Side of the Wind,” the auteur’s last cinematic will and testament, shot over years in the early-to-mid-‘70s but never assembled into a finished film until now. But Telluride also programmed no fewer than three new documentaries about Welles, one of which is Neville’s.

I found Neville receiving well-wishers at a Netflix-sponsored brunch at Telluride’s New Sheridan Chop House, and I asked him if it was anything other than a trick of the calendar to have two features coming out within months of one another.

“That was never the intention,” Neville tole me. “Sometimes fate just conspires to have that happen. So I don’t have a film coming out next year. But both projects had so much momentum for this year, because ‘Other Side of the Wind’ was coming out this year, and it felt like they belonged together. If you see the documentary, it really helps you understand the (Welles) film, and vice versa. And the Mister Rogers 50th anniversary was this year, so it felt like they both had to come out this year.”

With its overwhelming critical and box-office success, “Neighbor” might seem like a shoo-in for a nomination and very possibly a top prize in the Oscars’ documentary competition, barring any last-minute bout of insanity or anti-populism among the academy’s qualifying committee members. So will Neville campaign for two films in the same year?

“I’m going to try,” he said frankly. “I know! I mean, competing with myself … I don’t know. It’s happened before. So we’ll see what happens.”

Assuming he does go on the circuit for both, it’s bound to become a stock question at Q&As: Is there any intersection at all between Rogers and Welles? At Telluride, fresh off his premiere, I figured it wasn’t yet too cliché a question to put to him, and he had a thoughtful answer.

“I’ve started to think about that,” Neville said. “They’re opposites in so many ways, but what’s similar about ’em is they’re both mavericks. That’s definitely what makes a great character: somebody who went their own way in spite of the world telling them they were wrong. Those are the great, heroic figures, and whether or not they get recognized for what they did in their lifetime or not is beside the point. Because I feel like Fred didn’t get a lot of credit for what he did, and we’re trying now to rehabilitate Orson’s legacy. The popular perception of the last 20 years of Orson’s life was that he was washed up and doing television commercials, when he was doing some of his most groundbreaking work. And now I meet people under 30, some of whom work for me on projects, who don’t know who Orson Welles is, which I find incomprehensible.

“I grew up in a household of cineastes,” he added. “My dad had the biggest Betamax collection. And I’d seen most of Welles’ films as a teenager. He died on my 18th birthday, and I still remember being vividly sad that day. He was such a towering figure in my childhood, so doing this film in a way is a little way of paying something back to Orson.” Neville joked that he may spend the rest of his career only paying homage to the things that affected him by the time he was 15.

Mega-producer Frank Marshall has been nearly as omnipresent in Telluride these last few days as Welles. In his pre-Spielberg days, he worked on “Other Side of the Wind” for Welles and is briefly seen in it. He was the driving force behind procuring the footage and rights to get it assembled at last. Marshall made his own 38-documentary about the reconstruction of the film, which also premiered this weekend. And, of course, he provided crucial assistance and is interviewed for Neville’s film.

“It’s sort of bittersweet,” Marshall said after the Welles film’s premiere at the Palm. “I kind of thought for a while it was going to be a lifelong project. But to see it on the big screen with the sound and everything … I never imagined we would be here.” (Actually, he noted, Tom Luddy, the festival’s co-executive director, had lobbied him for decades, saying that it was a dream of his to have “Other Side of the Wind” finished and playing the festival. As it turned out, Luddy was advised not to travel this year because of a health issue, but his delight at a fantasy fulfilled was felt from afar.)

Peter Bogdanovich is the second banana in “Other Side,” portraying a massively successful young turk in Hollywood who may be overshadowing his legendary mentor — in other words, a thinly veiled version of himself. (John Huston plays the Welles-like figure in the drama.) “It’s a very sad movie, actually,” Bogdanovich said at the premiere, “not only because it’s Orson’s last movie, but … it comes across to me like the end of the world. Orson did a lot of sad movies, actually. But his artistry was the antidote. It’s almost like the saying that art is the only thing that can save us in the end. It’s sad because Orson’s not here to see it — or maybe he is, but we can’t see him.”

But “Other Side” is actually a hoot, too, on top of being an elegy, at least if you’re into wicked satire of Hollywood vanity. As experimental as the fast cutting and mixture of hand-held film stocks may be, it’s full of bon mots right out of a classically nasty film noir. Says one character of a callow studio executive (supposedly modeled on Robert Evans) who refuses to finance the completion of an auteur project: “He’s so cheap, he has rubber pockets so he can steal soup.” Almost half a century after he started filming, Welles is finally exacting what small revenge on the studio system he can.