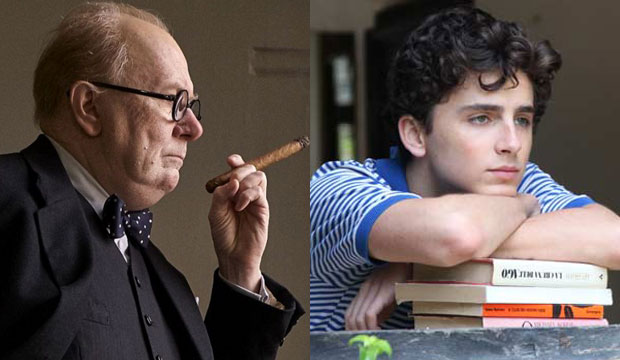 Gary Oldman (“Darkest Hour”) is far out front in the Oscar race for Best Actor, according to the first wave of predictions by our experts following the announcement of the nominations on Jan. 23. All but one of the 13 pundits to weigh in to date are backing the bid by this respected veteran actor; the other is going with newcomer Timothee Chalamet who racked up critics awards for his performance in “Call Me By Your Name.” (See the individual rankings of the Oscar experts.)

For his stirring portrayal of WWII leader Winston Churchill, Oldman swept the precursor prizes, winning at the Golden Globes, Critics’ Choice and SAG awards. He has odds of 8/5 to win at the Academy Awards on March 4. (See odds in all 24 races.) Of the dozen pundits predicting Oldman to win, 10 of them have Chalamet in second place. That gives him odds of 4/1 to pull off an upset.

We had thought that Oldman’s strongest competition would be Daniel Day-Lewis who has announced that “Phantom Thread,” will be his final film. This marks his second collaboration with writer/director Paul Thomas Anderson. Their first, “There Will Be Blood,” won Day-Lewis the second of his record three Best Actor Oscars in 2008. He has the second-place votes of two experts and odds of 9/2 to win a fourth Academy Award.

Rounding out the race are first-time nominee Daniel Kaluuya (“Get Out”), who has odds of 6/1 and two-time Oscar champ Denzel Washington (“Roman Israel, Esq.”), who has odd of 9/1 to win again on his eighth nomination for acting.