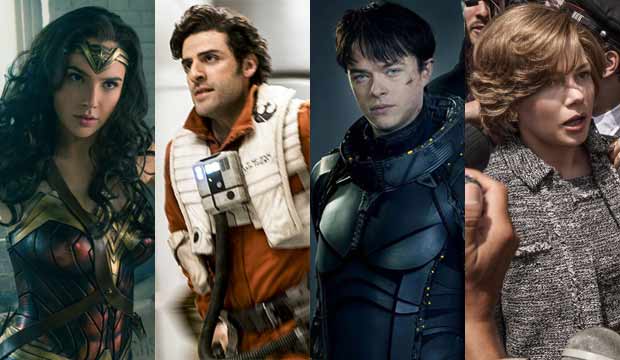 I tend to be a fairly conservative Oscar pundit. I don’t go out on many limbs or rely on gut instinct. I try to do the math as objectively as possible based on the most reliable awards season precursors, which is why my predictions accuracy is 100% every year — trust me, no need to fact-check that. But occasionally I will still follow a hunch or two — or five. The following are my top seven biggest hunches that, according to our racetrack odds, I’m completely wrong about.

Woody Harrelson (“Three Billboards Outside Ebbing, Missouri”), Best Supporting Actor — The controversial film has been surging, most recently winning top honors at the SAG Awards. Harrelson didn’t make many appearances on the awards scene for this performance early on, but he got in where it counts: at SAG and the BAFTAs. Those awards are bestowed by the same kinds of industry professionals who voted on the Oscars, so I think Harrelson is in. (Current Gold Derby predictions: Seventh place with 20/1 odds)

“All the Money in the World,” Best Adapted Screenplay — Because most of this year’s top awards contenders happen to be original scripts, this race is wide open. There’s widespread agreement on four of the nominees here: “Call Me by Your Name,” “Mudbound,” “Molly’s Game,” and “The Disaster Artist,” which leaves one last mystery slot. So who gets it? “Wonder” was nominated by the Critics’ Choice Awards. “Logan” was nominated by the Writers Guild. “Logan,” “Wonder Woman,” and “The Lost City of Z” were cited by the USC Scripter Awards. And the BAFTAs went with “Film Stars Don’t Die in Liverpool.” So why am I picking “All the Money” written by David Scarpa? Because of all the above mentioned contenders on the bubble I still think “All the Money” is the film likely to be seen by the largest number of academy members thanks in no small part to the attention the film received for replacing Kevin Spacey with Christopher Plummer at the last minute. (Current Gold Derby predictions: Eighth place with 40/1 odds)

“Wonder Woman,” Best Costume Design — This superhero movie has resonated like few before it because of its critical acclaim, its box office dominance, and the rarity of seeing a female superhero front and center in the hands of a female director (Patty Jenkins). It may be a long shot for, say, Best Picture, but watch out for this technical extravaganza in below-the-line races. One I’m betting on is Lindy Hemming for Best Costume Design. First, this is an open field since it’s mostly lacking in the obvious kinds of big-poofy-dress movies (that’s a technical term of course) that usually win costuming Oscars (e.g. “Marie Antoinette,” “The Duchess,” “Anna Karenina”). Second, “Wonder Woman” has the benefit of a period setting, so Hemming gets to show off the fantastical wardrobes of the Amazons as well as the more grounded styles of the World War I era. Third, Hemming is already well liked, having won this award for “Topsy-Turvy” (1999). And fourth, Hemming received a key nomination from the Costume Designers Guild. (Current Gold Derby predictions: 10th place with 100/1 odds)

TWO nominations for John Williams (“The Post,” “Star Wars: The Last Jedi”), Best Score — It’s never a long shot to predict that John Williams will be nominated for an Oscar. He’s the second most nominated person in history with an astonishing 50 bids (behind Walt Disney), including for films that were not otherwise embraced by the academy like “The Adventures of Tintin” (2011) and “The Book Thief” (2013). It’s not even that outlandish to predicting him for two nominations in one year since he’s earned multiple noms 14 different times. But as it stands he’s only a strong contender in our racetrack odds for “The Post.” I think he’ll get in for both that and “Star Wars: The Last Jedi.” (Current Gold Derby predictions: fourth place with 10/1 odds for “The Post,” sixth place with 40/1 odds for “Star Wars”)

SEEOscar nominations: Which of the 15 performers with SAG, Critics’ Choice and Golden Globe bids will be snubbed by Academy Awards?

“Valerian and the City of a Thousand Planets,” Best Visual Effects — This is a tough category. I’m skeptical of a couple of visually dazzling films that don’t seem as driven by their visual effects, per se, as they are by their cinematography, makeup, production design, and/or directing (“Dunkirk” and “The Shape of Water”). On the other hand, some of the biggest effects films of the year weren’t necessarily that well received or widely seen. But in some craft categories that doesn’t matter nearly as much. Consider the past Visual Effects nominations for films like “Poseidon” (2006), “Real Steel” (2011), “The Lone Ranger” (2013), and “Deepwater Horizon” (2016). So even though “Valerian” struggled with critics and at the box office, you’d be hard-pressed to find a movie in this category with more visual effects. Call me crazy. (Current Gold Derby predictions: Eighth place with 100/1 odds)

“Strong Island,” Best Documentary Feature — This is entirely driven by personal admiration and gut instinct. If academy members respond to this Netflix documentary half as well as I did it’s a shoo-in. This film is directed by Yance Ford, who recounts the murder of his brother and the racism that allowed his killer to go free without even being charged. In a year with other films about American racism like “Get Out” and “Mudbound” in the awards conversation, this highly personal documentary resonates even more strongly. (Current Gold Derby predictions: sixth place with 18/1 odds)