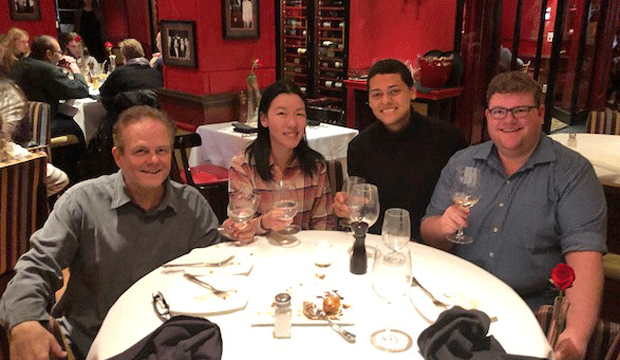 Enough! If you can’t beat ’em, hire ’em! — that’s my new motto. While representing TVGuide.com at Gold Derby for the past few years, Joyce Eng has won the most prediction contests against our other experts from top media. By far. She achieved (or tied) the highest accuracy scores for all of these prediction events at Gold Derby:

How heck does Joyce trounce the competition (including poor little ME) so consistently? That’s what she will now be forced to reveal since we were sneaky enough to hire her as our first new editorial staff addition since Gold Derby was acquired by Penske Media Corp. in 2015.

We began prying Joyce for her prediction secrets a few days ago when we celebrated her new job as our Senior Editor while dining at Lincoln Square Steak House in Manhattan. From left in the photo above: me, Joyce, senior editor Daniel Montgomery and contributing writer Charles Bright.

We’ve been unsuccessful so far getting her to tattle on herself, but we’ll keep pressing!

Joyce explains why she accepted our job offer: “I had long forced my poor friends to make awards predictions with me before I discovered Gold Derby way back when it was merely message boards. It’s been an honor being an Expert and it’s an even greater honor to join the team with the best Oscarologists who won’t judge me when I say I stayed up until 4 a.m. stressing out over my Oscar predictions (true story — Feb. 19, 2015).”