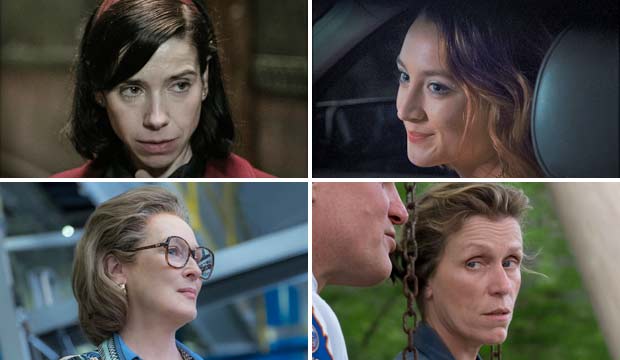 This year’s Oscars are unique in how much more female-driven the Best Picture nominees are. Five out of the nine contenders in the top category have female leads, and four of the Best Actress nominees are in films that are also up for the top award: Sally Hawkins (“The Shape of Water“), Frances McDormand (“Three Billboards Outside Ebbing, Missouri”), Saoirse Ronan (“Lady Bird”) and Meryl Streep (“The Post”). If one of those films wins both Best Picture and Best Actress, it would be only the 8th to pair those up in the last 75 years.

In the last three-quarters of a century the seven Best Picture/Best Actress match-ups were as follows:

1991 — “The Silence of the Lambs” and lead actress Jodie Foster

Before Fletcher’s win you have to go back another 33 years to find an example: “Mrs. Miniver” (1942) and its star Greer Garson. It was more common in the 1930s when “It Happened One Night” (with Claudette Colbert, 1934), “The Great Ziegfeld” (with Luise Rainer, 1936) and “Gone with the Wind” (with Vivien Leigh, 1939) doubled up. It happened one other time if you count “Sunrise” (1928), which won Best Actress (Janet Gaynor) and a separate Best Picture race for “Unique and Artistic Production”; at those inaugural Oscars “Wings” won the main Best Picture race. So at most it has only happened 12 times in the entire 89-year history of the Oscars.

Since Hollywood has historically been biased towards movies about men it is much more common for Best Actor to sync up with Best Picture. It has happened 27 times in Oscar history — more than twice as often. Of those, 26 occurred in the last 75 years, which is almost quadruple the rate of Best Picture/Best Actress agreements during the same period of time.

As of this writing we’re predicting a split between Best Picture and Best Actress, even though the Best Picture front-runner is a female-driven movie. Based on the combined predictions of thousands of users who have entered their picks at Gold Derby thus far, “The Shape of Water” leads the race for Best Picture with 10/9 odds, but McDormand gets leading odds of 2/13 for Best Actress over “Shape of Water” star Hawkins.

The Best Actress nominees came close to making history in another way. Margot Robbie (“I, Tonya”) rounds out the category for her performance as figure skater Tonya Harding. “I, Tonya” was snubbed for Best Picture, probably by a narrow margin given that the film earned Best Picture nominations from the Producers Guild and Golden Globes. If that biopic had made the cut in the top category this would have been the first time in 40 years that all five Best Actress nominees correspond to Best Picture nominees. But it was passed over in favor of a couple of movies centered around men: “Darkest Hour” and “Phantom Thread,” which had both been on the bubble in our nominations predictions. So in many ways the Oscars are still a man’s world.