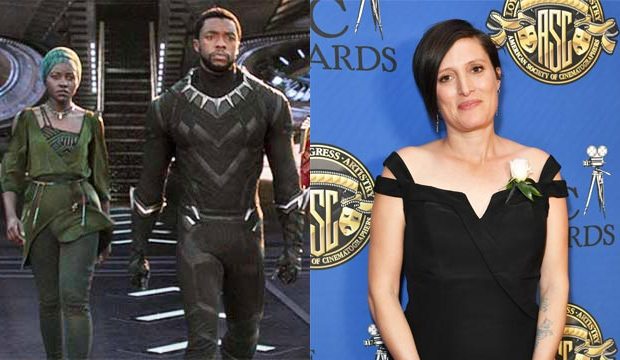 Rachel Morrison cracked the glass ceiling as the first woman nominated for Best Cinematography at the Oscars for “Mudbound.” For her follow-up project, Morrison was the director of photography for none other than “Black Panther,” which just broke through a ceiling of its own, smashing box office records in its opening weekend with a whopping $241 million. Could Morrison benefit from being attached to the most popular movie on the planet just as Oscar voting got underway on February 20?

In below-the-line categories at the Oscars only the films are listed on the ballot, not the individual artists’ or technicians’ names, so under normal circumstances voters might not even consider who the cinematographer is when deciding Best Cinematography. But that did not stop Morrison from receiving a lion’s share of goodwill and press for her groundbreaking achievement — even more than some of the acting nominees. At the Oscar nominees luncheon on February 5 as names were being announced for the annual class photo no one received more applause than Morrison. That outpouring of support has made Morrison a real threat to win. If her fellow nominees are aware of the significance of her nomination, this alone could push her over the top as it might indicate widespread enthusiasm within the academy.

Morrison previously worked with “Black Panther” director Ryan Coogler on his film “Fruitvale Station” (2013), so he recruited her for his biggest film to date. Coogler and Morrison went for broke delivering a visually exciting and refreshing addition to the Marvel Universe, and Morrison proved that she was able to deliver under the pressure and scrutiny of a $200 million franchise film.

But despite the well-timed success of “Black Panther” and her significant goodwill, Morrison is currently ranked fourth in our Oscar predictions with odds of 14/1. Currently leading is 13-time also-ran Roger Deakins for “Blade Runner 2049” with odds of 1/2. And after his wins at both the BAFTAs and American Society of Cinematographers Awards this past Sunday he should be looking good to finally win the Oscar.

However, Deakins has been in this position before and still lost. He picked up those two major precursors for “The Man Who Wasn’t There” (2001), but the Oscars opted for “The Lord of the Rings: The Fellowship of the Ring” instead. So with Morrison having possibly the best weekend of her career she could be the spoiler. But no matter what happens on Oscar night Morrison will still have made history, and there’s another silver lining: she could be nominated next year for “Black Panther” too.