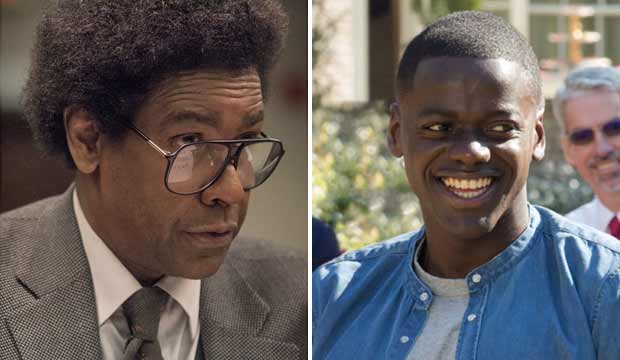 After a record-breaking number of black actors were nominated at the Oscars last year, there was some concern about whether there might be another #OscarsSoWhite controversy now in 2018. But luckily that probably won’t be the case when the nominations are announced for the 90th Academy Awards on Tuesday, January 23. Hoping to hear their names called in the Best Actor category are two-time Oscar winner Denzel Washington for his performance in “Roman J. Israel, Esq.” and rising star Daniel Kaluuya for his breakthrough performance in “Get Out.” If both are nominated on Tuesday, this will only be the fourth time in which multiple black actors were nominated for Best Actor in the same year.

The first instance was in 2002 when Washington and Will Smith were nominated for “Training Day” and “Ali,” respectively. Washington ended up winning that award.

Three years later, in 2005, Jamie Foxx and Don Cheadle became the second pair, earning nominations for their respective roles in “Ray” and “Hotel Rwanda.” In that case Foxx was the eventual winner.

Will Smith found himself competing against another black actor in 2007 when he and Forest Whitaker were nominated for their respective performances in “The Pursuit of Happyness” and “The Last King of Scotland.” That time Whitaker won.

Interestingly enough a black actor has won each time there have been multiple nominees in the category. Could that give a boost to Washington or Kaluuya if both are nominated?

Washington is no stranger to the Academy Awards. He currently holds the record as the most nominated black actor with seven prior acting noms including two wins: Best Supporting Actor for “Glory” (awarded in 1990) and his aforementioned Best Actor win for “Training Day.” In addition, he received a Best Picture nomination last year as a producer of the film “Fences.” Washington’s performance in “Roman J. Israel, Esq.” could help him add to that total as it has already netted him Golden Globe, Image Award, and SAG Award nominations.

Kaluuya has proven to be a strong contender to earn his first Oscar nomination. He has earned Golden Globe, BAFTA, Critics’ Choice, and SAG Award nominations in addition to taking home an NAACP Image Award on January 15. If nominated, the 28-year-old Kaluuya would become the youngest black actor to be nominated for Best Actor, and he would follow Chiwetel Ejiofor (“12 Years a Slave”) as the second British actor of African descent to earn a Best Actor bid.

Do you think Kaluuya and Washington will both be nominated? Will one of them also win?

MAKE YOUR PREDICTION: Who will win Best Actor?
To save your prediction, you must log in to Gold Derby. Click here to sign in with existing account -- or create a new one.
PREDICTthe Oscar nominees now; change them until January 23