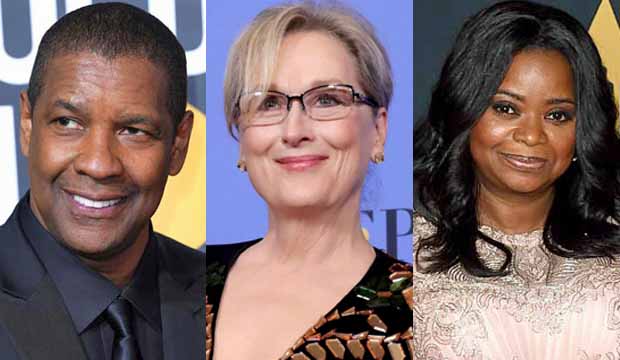 Among this year’s 20 actors to earn Oscar nominations are Denzel Washington, Meryl Streep and Octavia Spencer, up for their turns in “Roman J. Israel, Esq.”; “The Post”; and “The Shape of Water,” respectively. Washington, Streep and Spencer mark the trio of actors to this year earn consecutive Oscar nominations, having last year been up for “Fences,” “Florence Foster Jenkins,” and “Hidden Figures.” Their achievement marks the 14th occasion in Oscar history in which three or more actors have returned as nominees the following ceremony.

SEEOscars 2018: Nominations in All 24 Categories

In the early days of the Oscars, consecutive acting nominations were commonplace. From 1936 to 1947, there were eight occasions of this nature. Let’s take a look back at those years:

By the 1950s, however, this trend of returning nominees began to dwindle. There were two occasions in this decade in which a trio of actors returned: 1952 and 1953 (Marlon Brando, Jack Palance and Thelma Ritter); 1957 and 1958 (Deborah Kerr, Elizabeth Taylor and Arthur Kennedy).

In the 1960s, not a single trio of actors earned consecutive Oscar nominations. The following decade, one quartet scored back-to-back nominations: Jack Nicholson, Al Pacino, Ellen Burstyn and Madeline Kahn in 1973 and 1974.

In 1982 and 1983, one quintet of actors were returning nominees – Meryl Streep, Debra Winger, Charles Durning, John Lithgow and Glenn Close. The 1990s, however, saw no trio or more of actors garner back-to-back nominations. Most recently, prior to this year in 2009 and 2010, Jeff Bridges, Colin Firth and Jeremy Renner were nominees.