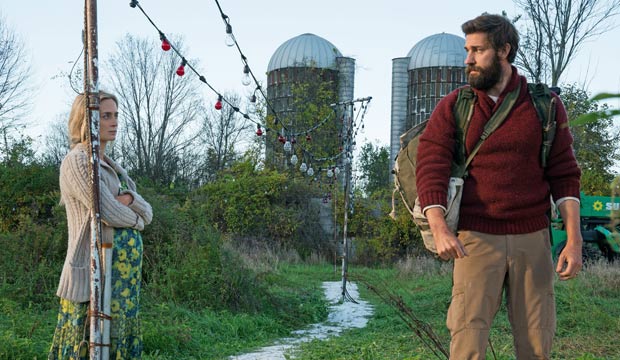 One of Paramount’s top awards contenders this year is “A Quiet Place,” a smash box office hit from this past April. Gold Derby had been informed for the past few months that stars Emily Blunt and John Krasinski would be campaigned in the lead acting categories. But now a major category switcheroo announced to us on Tuesday is that both of them will be in the supporting races instead. This move will apply to the campaign for Oscars 2019, Golden Globes, SAG Awards, BAFTA, Critics’ Choice and more (although Academy Awards voters can place contenders wherever they wish).

Along with starring, Krasinski directed and co-wrote the film, which has grossed over $188 million domestic and $332 million worldwide. He and real-life wife Blunt play parents Lee and Evelyn Abbott, who do whatever it takes to keep themselves and their children alive in a futuristic world filled with aliens. These creatures feast on anything that makes a sound, so the entire family must remain completely quiet. The duo will compete in the Best Supporting Actor and Best Supporting category alongside their on-screen children Noah Jupe and Millicent Simmonds.

One reason for the movie is that Blunt also has a major awards contenders later this year with Disney’s “Mary Poppins Returns,” in which she will certainly be the lead actress. She is a five-time past Golden Globe nominee, including the films “The Devil Wears Prada” (2006), “The Young Victoria” (2009), “Salmon Fishing in the Yemen” (2011) and “Into the Woods” (2014). She won on her second attempt for the TV miniseries “Gideon’s Daughter” (2005). She was also a BAFTA and SAG Awards nominee for “The Girl on the Train” (2016).

Krasinski is a three-time Emmy nominee for producing “Lip Sync Battle” and had a fourth for producing “The Office: The Farewells.” He won two SAG Awards as part of the comedy ensemble of “The Office” (2007, 2008) and had five other nominations for the same category.

In advance of this official announcement today, we’ve only been offering Blunt and Krasinski as options in the lead categories for each awards event. Be sure to update your predictions today and include them in the supporting categories if you think they will be nominated. Be sure to check out how our experts rank this year’s Oscar contenders. Then take a look at the most up-to-date combined odds before you make your own 2019 Oscar predictions. Don’t be afraid to jump in now since you can keep changing your predictions until just before nominations are announced on January 22.