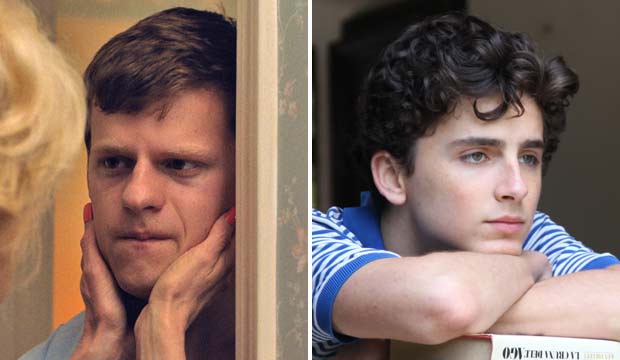 Last year Timothee Chalamet made history when he earned a Best Actor nomination for “Call Me by Your Name.” He was 22 years, 27 days old, which made him the third youngest nominee in the category’s history behind Jackie Cooper for “Skippy” (9-years-old) and Mickey Rooney for “Babes in Arms” (19-years-old). This year Lucas Hedges could join Chalamet on the list of the all-time youngest contenders if he makes the cut for either “Boy Erased” or “Ben is Back,” but he’d just barely miss third place by two weeks.

That would make Hedges the fourth youngest Best Actor nominee in Oscar history. But we already know the academy likes him; two years ago he was nominated for Best Supporting Actor for “Manchester by the Sea” when he was just 20 years, 43 days old, which made him the eighth youngest nominee in the history of that category. If he grabs a Best Actor nom this year he’ll be the only actor to rank among the top 10 youngest contenders in both categories.

But which film will get him the nom? According to the combined predictions of thousands of Gold Derby users, his better bet is “Boy Erased,” in which he plays a real-life teenager whose parents send him to a religious camp to pray away the gay. As of this writing he’s a dark horse, ranked ninth with 78/1 odds, but two of the Expert journalists we’ve polled think he’ll get in: Edward Douglas (Weekend Warrior) and Andrea Mandell (USA Today).

He’s not currently considered a top contender for “Ben is Back,” in which he plays a recovering drug addict who returns home unexpectedly to visit his mother Julia Roberts. He’s an underdog with 100/1 odds for that performance, but it’s early yet: that film doesn’t open until December 7, so as the date approaches his odds might improve.

Having both films might actually help his chances no matter which one ends up getting more traction. Awards voters often admire actors who show up in multiple films. Jessica Chastain earned her first Oscar nom for “The Help” (2011) in the same year she also appeared in “The Tree of Life,” “Take Shelter” and “Coriolanus.” And Alicia Vikander won Oscar for “The Danish Girl” (2015) in a year she was bolstered by performances in “Ex Machina,” “Burnt” and “The Man from U.N.C.L.E.”

Oscar voters don’t usually rally behind young men the way they do for young women, but Hedges has continually proven that his “Manchester” nom was no fluke. Last year he co-starred in two Oscar nominees for Best Picture (“Lady Bird” and “Three Billboards Outside Ebbing, Missouri”), and in addition to “Boy” and “Ben,” he also co-stars this season in another drastically different role: as a bullying older brother in Jonah Hill‘s “Mid90s.”

Do you think Hedges will get another Oscar nomination this year? And if so, for which film?