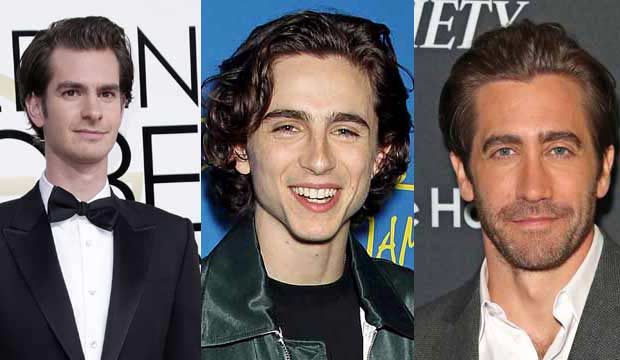 Who will be the five Best Actor nominees at this years Oscars? Over the past three months, Gold Derby has hosted webchats and other interviews with 11 of this year’s contenders. They include several previous nominees and first-time possibilities. Click on any name below to be taken to in-depth interviews about their current films and careers.

Jamie Bell (“Film Stars Don’t Die in Liverpool”): Bell stars in this true life drama as Peter Turner, a young actor who has an affair with legendary movie star Gloria Grahame (Annette Bening). He previously competed at SAG as Best Actor and Best Ensemble for “Billy Elliot” (2000), for which he won a BAFTA. (click here to be taken to his full interview)

Matt Bomer (“Walking Out”): Bomer plays Cal, a gruff Montana farmer trying to bond with his teenage son (Josh Wiggins) when a brutal encounter in the wild changes everything. He previously won a Golden Globe as Best TV Supporting Actor for “The Normal Heart” (2014), for which he also competed at the Emmys. (click here to be taken to his full interview)

Kenneth Branagh (“Murder on the Orient Express”): Branagh directed and stars in this Agatha Christie adaptation as Hercule Poirot, a detective solving a murder that occurs on a train he’s traveling on. Branagh has received five Oscar nominations in his career (Best Actor and Best Director for “Henry V” in 1989; Best Live Action Short for “Swan Song” in 1992; Best Adapted Screenplay for “Hamlet” in 1996; and Best Supporting Actor for “My Week with Marilyn” in 2011). (click here to be taken to his full interview)

Timothee Chalamet (“Call Me By Your Name”): Chalamet play Elio, a 17-year-old boy in Northern Italy who begins a love affair with a visiting American student (Armie Hammer) in Luca Guadagnino‘s romantic drama. Chalamet contends at the Golden Globes, Critics Choice, SAG, and Independent Spirits for the film. (click here to be taken to his full interview)

James Franco (“The Disaster Artist”): Franco directs and stars in this biographical comedy as Tommy Wiseau, the auteur behind the so-bad-it’s-good cult classic “The Disaster Artist.” Franco, a previous Best Actor Oscar nominee for “127 Hours” (2010), recently won a Golden Globe as Best Comedy/Musical Actor for the film, and competes at SAG and the Critics Choice. (click here to be taken to his full interview)

Andrew Garfield (“Breathe”): Garfield stars as Robin Cavendish, an advocate for the disabled who became paralyzed from polio at the age of 28. Garfield contended at the Oscars, Golden Globes, BAFTA and SAG for the 2016 movie “Hacksaw Ridge.” (click here to be taken to his full interview)

Jake Gyllenhaal (“Stronger”): Gyllenhaal plays Jeff Bauman, who lost both his legs in the 2013 Boston Marathon bombing, becoming a symbol of hope and courage for the shaken city. Gyllenhaal previously competed at the Oscars as Best Supporting Actor for “Brokeback Mountain” (2005). (click here to be taken to his full interview)

Kumail Nanjiani (“The Big Sick”): Nanjiani co-wrote and stars in this autobiographical comedy as Kumail, a Pakistani comedian forced to take care of his ex-girlfriend (Zoe Kazan) when she falls into a medically induced coma. Nanjiani contends at Critics Choice as Best Comedy Actor and for Best Original Screenplay (with wife Emily V. Gordon). He also competes at SAG as part of the film’s cast. (click here to be taken to his full interview)

Robert Pattinson (“Good Time”): In this crime drama from Benny Safdie and Josh Safdie, Pattinson plays Connie Nikas, a bank robber who spends the night trying to keep his mentally ill brother (Benny Safdie) from being sent to Rikers Island. Pattinson reaped an Independent Spirit Award nomination as Best Actor for his performance. (click here to be taken to his full interview)

Andy Serkis (“War for the Planet of the Apes”): In the concluding chapter of the latest “Planet of the Apes” trilogy, Serkis reprises his role of Caesar, a super-intelligent primate who must defend his species against humans. Serkis previously competed at the Golden Globes as Best TV Supporting Actor for “Longford” in 2008 and at the Emmys as Best Movie/Mini Supporting Actor for “Little Dorrit” in 2009. (click here to be taken to his full interview)

Jacob Tremblay (“Wonder”): Tremblay stars in this family drama as Auggie Pullman, a boy with facial deformities who starts his first year at public school. Tremblay reaped a SAG nomination as Best Supporting Actor for “Room.” He competes at the Critics’ Choice Awards as Best Young Actor/Actress for “Wonder,” a prize he previously won for “Room.” (click here to be taken to his full interview)