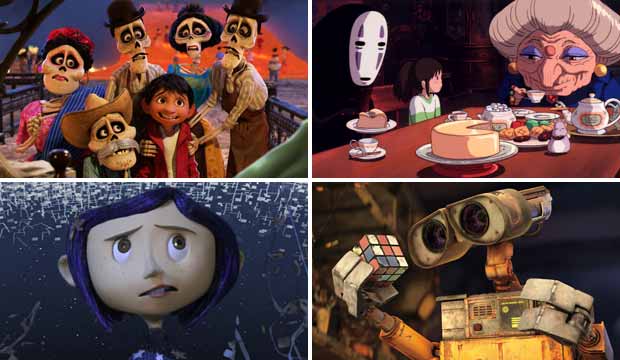 In the entire 90-year history of the Oscars there have only been three animated films nominated for Best Picture: “Beauty and the Beast” (1991), “Up” (2009) and “Toy Story 3” (2010). Those last two only made the cut after the motion picture academy expanded Best Picture to 10 slots; I doubt either would have been nominated with only five contenders in that race. These days animated achievements tend to be relegated to Best Animated Feature, and before that category was created in 2001 they were typically ignored in top categories entirely. So what have been the academy’s worst omissions?

Our forum posters are discussing the animated films they think should have been Oscar nominees for Best Picture. Scroll down to read some of their comments, and vote in our poll at the bottom of this post to let us know which you think was the most unjustly snubbed for top honors. That might include Pixar’s latest, “Coco,” which scored 81 on MetaCritic and 97% freshness on Rotten Tomatoes, and on top of that it grossed more than $700 million worldwide, bridging that gap between commercial and critical success in a way the Oscars usually love to celebrate. It did score two Oscar noms: Best Animated Feature and Best Song (“Remember Me”). But it joins a long list of films spanning decades that missed out on the top category, from “Snow White” to “Inside Out.”

Read what out posters had to say below and join the discussion in our forums.

Filmatelist: “1940 had 10 films nominated for Best Picture, and ‘Pinocchio’ is better than at least half of them.”

Macca: “‘Spirited Away ‘for sure. Ghibli will always be better than Disney.”

Tyler The Awesome Guy: “Also ‘Kubo and the Two Strings’ and ‘Zootopia’ were among the ten best films last year.”

Foolio: “There are many throughout history but ‘Inside Out’ is the most glaringly obvious recent example.”