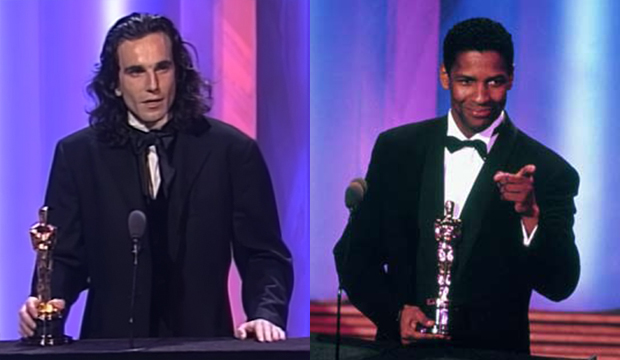 Daniel Day-Lewis (“Phantom Thread”) and Denzel Washington (“Roman J. Israsel, Esq.”) have a date at the Oscars — and it’s not their first. The Best Actor nominees, who’ve never starred in a film together, have a lot of shared Oscar history, going back to their big breakthroughs early in their careers. Half of the six nominations for Day-Lewis have overlapped with Washington, who’s on his eighth acting nomination (he has another one for producing Best Picture nominee “Fences” last year). But even when the two weren’t nominated simultaneously they still crossed paths somehow.

Day-Lewis and Washington both won their first Oscars on the same night 28 years ago — the former took Best Actor for his portrayal of Christy Brown in “My Left Foot” (1989) and the latter won Best Supporting Actor for playing runaway slave soldier Pvt. Tripp in “Glory” (1989). They both returned the following year to present Best Actress and Best Supporting Actress to Kathy Bates (“Misery” [1990]) and Whoopi Goldberg (“Ghost” [1990]), respectively.

The pair wasn’t nominated in the same year for any of their ’90s roles, though Day-Lewis’ Best Actor bid for 1993’s “In the Name of the Father” fell to Washington’s co-star Tom Hanks’ performance in “Philadelphia.” As Hanks’ lawyer in the pioneering AIDS film, Washington had opted to campaign in lead instead of supporting, but wasn’t recognized during the season as Hanks monopolized the conversation. Washington told “Deadline” last year that he had no regrets going lead.

After following Sidney Poitier (“Lilies of the Field” [1963]) as the second black Best Actor champ for “Training Day” (2001), Washington presented Best Actress to Nicole Kidman (“The Hours” [2002]) the next year, the same night Adrien Brody (“The Pianist” [2002]) beat Day-Lewis (“Gangs of New York” [2002]) for Best Actor. They both appeared in the family album of winners that night to mark the Oscars’ 75th anniversary.

Five years later, Day-Lewis and his milkshake swept all the Best Actor prizes for “There Will Be Blood” (2007). The oil boom epic lost to “No Country for Old Men” for Best Picture, which was presented by — you guessed it — Washington.

Five years after that, they were finally nominated against each other for the first time. Washington’s alcoholic pilot in “Flight” (2012) lost to Day-Lewis’ transformation into Abraham Lincoln in “Lincoln” (2012). Day-Lewis became the first person to win Best Actor three times.

And now the two are competing against each other again, presumably for the last time if “Phantom Thread” is indeed Day-Lewis’ final film. But if you ask us, Washington should try to woo Day-Lewis out of retirement so these two icons can actually star in a movie together. Neither will likely win this year, so Day-Lewis won’t tie Katharine Hepburn‘s record four Oscars yet. And given the academy’s affinity for both of them, they could be the first co-stars from the same film nominated for Best Actor since F. Murray Abraham and Tom Hulce from “Amadeus” (1984). DDL is an Oscar good luck charm after all. Think about it, Denzel.